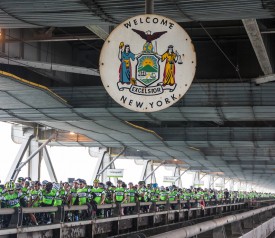 NEW YORK CITY, February 17, 2016 – The Campagnolo GFNY Championship in New York on May 15 will be sanctioned by USA Cycling. A rule change in the competitive mass participation category opened the door for a renewed partnership.

For its inaugural edition in 2011, GFNY was sanctioned by the UCI and USA Cycling. However from 2012 to 2015, USAC rules prevented GFNY from being accredited as such. The rules initially did not allow competition prizes and were later modified to award prizes based only on timed climbs. GFNY participants are chip timed start to finish and GFNY awards prizes based on total time from the start to the finish line of the 100-mile race.

“Gran Fondo” stems from Italy with the first event being held in 1970. The Italian Cycling Federation (Federciclismo) defines a “Gran Fondo” as a mass participation cycling event with results and awards based on start to finish timing. GFNY is modeled after Italian Gran Fondos.

“During a conversation with the new USA Cycling CEO Derek Bouchard-Hall on antidoping, he asked why the Gran Fondo New York Championship race is not USA Cycling sanctioned,” says GFNY CEO Uli Fluhme. “It came as a surprise to him that it was because of USAC’s rules. Derek understands the value of events like ours for the sport and made sure the rules would be amended accordingly. I’m impressed how quickly the changes were implemented and greatly appreciate the support and agility while on-boarding GFNY. Being sanctioned by the national governing body is a no-brainer for us at GFNY. Whenever possible, we work with national cycling federations for all our GFNY World events globally.”

USA Cycling’s CEO Derek Bouchard-Hall says: “We are thrilled that GFNY, one of the best cycling events in America, has chosen to sanction with USA Cycling.  We are actively seeking to support great events like these – be they gran fondos, gravel grinders, or sportives – and to have one of the very best choose to partner with us demonstrates the value we can bring to event promoters and their participants.  I’m so pleased, in fact, that I intend to be on the start line of the GFNY this year!”

GFNY results do not, for now, count towards upgrade points for racing categories. “A mass start of 5000 riders in an international field is certainly different from the classic 50-rider USAC sanctioned criterium,” adds Fluhme. “At the minimum, however, points could be awarded to anyone finishing in a certain time. You get to upgrade from Cat 5 to 4 by just participating in races. GFNY should be no different in that regard.”

Further Material For Your Use