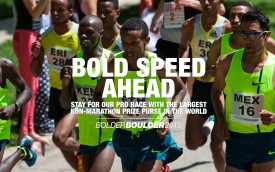 BOULDER, COLO. (May 14, 2015) – BolderBOULDER, America’s All-Time Best 10K, today announced the Americans that will make-up team USA in the 2015 BolderBOULDER International Team Challenge. This year, American teams Red, White and Blue will be determined after all athletes cross the line, making it a race within a race.

“This year the nine American men and women won’t be placed on teams until they cross the finish line. The first three racers in the men’s and women’s races that finish will be placed on Team Red, the next three will be Team White and the last three, Team Blue,” said BolderBOULDER pro athlete coordinator, Don Janicki. “We are really excited to see how the new format for American athletes will play-out, we think it will make for a very exciting and competitive race!”

Members of the Men’s Team USA Include:

Members of the Women’s Team USA Include:

In addition to the American athletes competing at this year’s race, the BolderBOULDER will also be welcoming back altitude-trained Team Eritrea, who will be a fierce competitor for teams Ethiopia and Kenya.

“Based on the teams and athletes continuing to commit, the BolderBOULDER will host another high level international field,” said BolderBOULDER Race Director, Cliff Bosley. “Top ranked teams including Mexico, Ethiopia, Eritrea and Kenya race well at BolderBOULDER because they are altitude and marathon-trained athletes.”

The BolderBOULDER created the International Team Challenge in 1998, which includes professional runners from all over the world that compete on three-person teams in a team by country format, for one of the largest non-marathon prize purse in the country. In 2014, athletes that competed in the BolderBOULDER earned more than $150,204. This year’s total prize purse is valued at $110,600 before bonuses. The men’s and women’s professional races follow the BolderBOULDER course and are scheduled to finish in a packed stadium at the University of Colorado’s Folsom Field before the Memorial Day Tribute.

Not all international teams are confirmed. Roster subject to change.