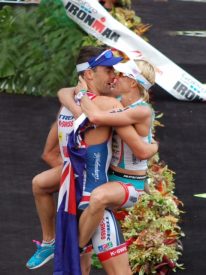 Boulder, CO — In lieu of announcing her long-awaited 2017 race schedule, 3-time Ironman World Champion Mirinda “Rinny” Carfrae stunned and delighted triathlon fans with the news that she and husband Timothy O’Donnell, also a world champion triathlete, are expecting their first child. Baby O’Donnell is due to arrive August 10, 2017.

“We’re over the moon, and we’re so excited to finally share the news with everyone,” said an elated Carfrae. “Starting a family has been a dream for Tim and I for years. At the Kona finish line last year, I told him I thought it was time. We were fortunate that it happened pretty quickly for us.”

While Carfrae will forgo the start line at this year’s Ironman World Championship, she’s eager to be on the sidelines to support her husband in his quest for Kona’s crown. O’Donnell, a top ten Kona regular, previously placed third at the prestigious event (2015) and is firmly focused on ascending the top podium step.

“It’s Tim’s time to shine,” said Carfrae. “It can be tough when both partners race at a professional level and can’t give their all to supporting one another. This year I’m doing everything I can to run our household and allow him all the time he needs to train and recover in preparation for Kona. I plan to take on more than my share of diaper duty for the first few months! And I’m sure that having our mini at the finish line in Hawaii will be added motivation for him on race day.”

“This is a transition of a very different sort, and it’s one we look forward to settling into and enjoying,” said O’Donnell. “I’m ready to welcome our new passenger for baby stroller runs!”

Carfrae and O’Donnell are no strangers to that finish line on Ali’i Drive. At the Ironman World Championship in 2009—Carfrae’s rookie attempt at the distance—she scored an impressive second place. She’s graced the podium at each of her Kona finishes since (seven in total), thrice earning the title of Ironman World Champion (2010, 2013 and 2014). In 2013, her winning time of 8:52:14 set a new course record, and her lightning fast run split was the third fastest overall on the day. Carfrae’s 2013 Kona marathon, clocked at 2:50:38, still stands as the women’s Ironman World Championship run course record. Carfrae also owns a coveted Challenge Roth victory (2014) and the title of Ironman 70.3 World Champion (2007).

Despite the draw of motherhood, Carfrae’s competitive fire burns strong, and she plans a return to long-course racing in the future. For now, she’ll relish the opportunity to cheer for O’Donnell and to devote more time to her sponsors, all of whom will continue their support throughout her maternity leave.

“I’ll definitely be back. I love racing too much to hang it up while I still have that fire in me,” said Carfrae. “I’m training a bit now, but without any structure. It was odd at first, but now I’m really enjoying the freedom from a disciplined program. I think the break is a good thing. I know that when it’s time to get back at it, I’ll be refreshed and ready to go. But for now, my focus is on staying healthy and growing a healthy baby.”

O’Donnell is a graduate of the US Naval Academy (BS, Naval Architecture, 2003) and UC Berkeley (MSEng Ocean Engineering, 2005). He is an active supporter of Team RWB.  For more information, visit timothyodonnell.com and follow him @TOinTri on Facebook, Twitter, and Instagram.