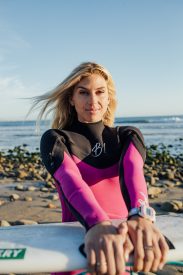 20 December 2021, SYDNEY /ENDURANCE SPORTSWIRE / – MANA Sports & Entertainment Group are proud to announce American professional surfer Sage Erickson has signed on as an ambassador for the Pho3nix Foundation, a not-for-profit with the express aim to assist and inspire children through sport. The Pho3nix Foundation has tasked MANA to find the athletes that will best exemplify the movement’s ideals: triumph through revitalisation, resilience, and passion, becoming a symbol of hope and strength.

After discovering the sport of surfing in 2004 at the age of 11, Erickson began her competitive career only three years later and dominated the NSSA and Pro junior circuits before qualifying for the World Surf League in 2012. She has since claimed victories around the world including winning the US Open of Surfing twice. She ends 2021 ranked 13th on the WSL Women’s Championship Tour.

“I’m just so excited to be a part of it and to get kids moving,” says Erickson. “What really got my attention is the symbolism of the Phoenix, what that represents: to rise from the ashes to rebirth, to restart, to regenerate… That’s something I’ve wanted in my life so much: to spread messages that truly resonate with my heart,” Erickson says.

In more good news for the MANA athlete roster, Magnus Ditlev stormed to second place at the Clash Daytona triathlon in Florida on the 4th of December, capping an incredible season in the sport that has seen him line up and be competitive against Olympic and world champions. With this performance the Dane also clinched the #2 position in the Challenge Family Pro Athlete World Bonus rankings, taking home a USD $20,000 year-end windfall. He also ends the year 15th on the Professional Triathletes Organisation World Rankings, improving from 38th in 2020.

Dutch triathlete Maya Kingma has signed a sponsorship deal with Woest Sport. The multibrand sports store chain will provide the Olympian with sports gear and bicycles through 2022. Having attained a career-best ranking of 4th in the world in 2021, Kingma looks forward to being able to rely on top-of-the-line equipment to improve her performances as she races the World Triathlon Championship Series and builds towards the 2024 Paris Olympics.

MANA CEO Chris McCormack looks back on the year which has seen the company he founded expand into athlete management and reveal groundbreaking projects that can change the face of sport. He notes, “2021 has seen MANA deliver with passion, purpose, and pride in the projects we partner in as well as in representing and advocating for the athletes we manage. But it’s only just a springboard for bigger things in 2022 as we seek to be the positive change we want to see in the wide world of sports and entertainment.”