American Criterium Cup closes the season with a $100K prize payout and plans for 2023. 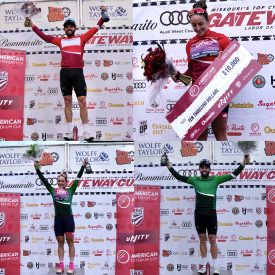 With an overall payout of $100,000, the American Criterium Cup wrapped up the series with the Bommarito Gateway Cup in St. Louis.

Monday, September 26, 2022 /ENDURANCE SPORTSWIRE/ – With an overall payout of $100,000, the American Criterium Cup wrapped up the series with the Bommarito Gateway Cup in St. Louis.

“We’re happy with the success of the first season for the ACC, and more so that the top teams and athletes that participated earned some significant prize money,” said Jeff Corbett, ACC Administrator.

“The American Criterium Cup exceeded our expectations in almost every way. Racer participation was strong, the livestream coverage had great viewership, and all 10 races showcased the passion of their local cycling communities. It’s clear that road cycling in the United States is back in growth mode, and the American Criterium Cup is a critical reason why.” – Brendan Quirk, President & CEO USA Cycling.

USA Cycling has held the total prize purse in escrow and will be making prize payments on behalf of the ACC.

The American Criterium Cup is a ten-race series, with 2022 events featuring some of the best criteriums races in the US.

“The American Criterium Cup was a significant target for Project Echelon in 2022. A series like the ACC gave us a target to aim for and a platform to measure ourselves against the competition. The Livestream was also essential to making the sport more accessible to the masses, including our fans, veteran community, advocates, and other stakeholders. This team’s vital mission is to educate, equip and empower veterans through physical activity. The series helped us share that message with communities across the country and create more fans for cycling.” –Eric Hill, Project Echelon Racing.

The entire 2022 series was streamed live and for free via a partnership with Outside TV, part of Outside Magazine.

“We are indebted to Outside for taking a chance on our first-year production of the series event live streams. Producing a live stream is not an easy task. The American Criterium Cup athletes, series events, and sponsors reached a worldwide audience thanks to Outside Interactive. The US domestic criterium peloton saw massive gains by racing the ACC, marketing their teams and themselves throughout the six-month series calendar. Motivation is high going into year two to continue the positive trend of elevating criterium race coverage in the US.” – Marilyn Cullinane, Sunny King Criterium.

With plans being made for a return of the American Criterium Cup for the 2023 season, promoters and administrators are working to develop an even more dynamic and relevant series for the American criterium racing community.

“The 2022 American Criterium Cup was, from our perspective, a successful series. Our organization continues working cooperatively on elevating the criterium bicycle racing in the United States. We look forward to evolving the series in a meaningful way with input from athletes, the governing body, our sponsors, and each other.” – Mike Weiss, Bommarito Audi Gateway Cup.

A complete and free replay of the 2022 ACC series events can be streamed from Outsidetv.com.

Final series standings can be found at https://americancritcup.com/results-standings/

The American Criterium Cup is a ten race criterium series that elevates the stature of criterium racing in the United States. The series is led by a group of independent criterium race organizers collaborating with and supported by USA Cycling, with input from professional and domestic teams and athletes. Each event has pledged to execute each event with standards of excellence, high production quality, and safety. Organizers of the series have placed $100,000 in escrow with USA Cycling for a series purse to be split equally among men and women. Learn more at americancritcup.com. F