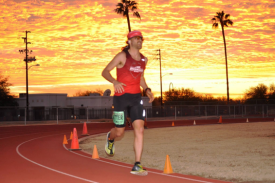 At the invitation-only December event, Bitter will pursue the current world record of 11:28:03, which will require 6:53 per mile pace to shave nearly 13 minutes from his previous best.

Aravaipa Running’s Desert Solstice Track Invitational is an elite ultrarunning meet on December 9-10, 2017 on the 400-meter track at Central High School in Phoenix, Arizona. The event hosts two races; the 24-hour run and the 100-miler, both done on a track. The Desert Solstice is specifically designed for elite runners to set records and qualify for the national 24 Hour team. At this event, 41 national records and 10 world records have been set.

Bitter’s training peaks at 100-120 miles per week on flat surfaces similar to a track. The majority of his time is spent on high aerobic activity, but he also does speed and tempo work, along with the occasional rest and recovery day. As the event nears, Bitter will spend more of his training on tracks to prepare his body for tight turns and mentally prepare for the monotony of running small circles for nearly 12 hours.

Bitter is well-known for following a OFM, or Optimized Fat Metabolism diet.  While in competitive training mode, Bitter’s primary macronutrient is fat. During peak training weeks, he plans to up his carb intake, but his main focus is to arrive at the race with a high level of fat adaptation. During the race he’ll take small amounts of carbohydrate mostly from Xendurance Fuel-5 and plenty of water and electrolytes primarily from Xendurance Hydro-X. Typically for 100 miles, he aims for around 20-40 grams of carbohydrate per hour, but the majority of fuel will come from body fat. Bitter believes a common misconception in the running world is that athletes can’t rely on body fat, because they are already too lean. He said even at 5% body fat you have enough stored fat fuel to get through an ultra marathon when coupled with glycogen stores and a small amount of carbohydrate per hour.

The Desert Solstice event’s biggest challenge is running more than 400 laps around a track, which could make many people extremely dizzy. Most track ultras switch directions after fours hours, and though Bitter says he doesn’t get dizzy, he does get an awkward feeling when switching directions after running in a repetitive state for so long. To stay sane while running all those laps, Bitter tries to maintain a meditative state and focus on the end goal.

“If you practice getting into a rhythm, it actually isn’t too bad for the first three quarters of the race,” Bitter explained. “I get into a bit of a meditative state and focus on small benchmarks. It gets tricky near the end when it’s harder to maintain goal pace when you aren’t hyper focused, so it starts to become a big mental and physical challenge. At that point, you just have to continually remind yourself about all the training you did to prepare, and how much you worked to get yourself to that position.”

Bitter also relies on music to keep his spirits high and his pace strong.

“I definitely listen to music!” he said. “I haven’t put together my Desert Solstice playlist yet, but I’ll have a wide variety of different genres of music, so whatever I’m in the mood for will be loaded and ready to go.”

As for the issue of using the bathroom and slowing down his time, Bitter’s most efficient 100-mile race consisted of a total stoppage of 60-90 seconds at his previous Desert Solstice run in 2015. Race directors for the event have portable toilets on the track so runners can minimize bathroom time.  Each runner also has their own “base camp” tent right on the track for their crew, nutrition and gear.

Bitter, a full-time employee for Altra Footwear as a tech rep, plans to wear a prototype of the soon-to-be-released Altra Vanish-R shoe. This light and flexible racing flat weighs just 3.9 ounces and will be released in February 2018. Follow him on Facebook, Instagram and Strava to stay updated on his amazing accomplishments.

While working at a running store, Altra founder Golden Harper was frustrated that modern running shoe technology caused poor running form and had not decreased running injuries. His passion to create a shoe that followed the science produced Altra’s FootShape™ toe box and Zero Drop™ platform. Since its founding in 2011, Harper and co-founder Brian Beckstead have grown Altra from one to 25 shoe styles, winning multiple Editor’s Choice awards and distribution in more than 60 countries. Join the conversation @AltraRunning and #ZeroLimits on Twitter, Instagram and Facebook.

View all Releases by iFIT