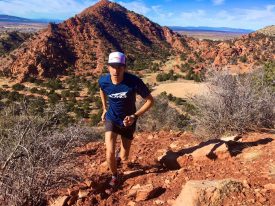 (Logan, UT – January 14, 2019) Altra is pleased to sign ultramarathoner Hayden Hawks to its Elite Team. Hawks burst onto the trail scene in 2016 with a slew of wins and course records at a handful of high-profile ultras. His most pivotal performance came in 2017 when he made his international debut at the legendary Ultra-Trail du Mont-Blanc CCC in Chamonix, France, setting a new 100k course record time of 10:34:30. Hawks kicked off the new year and his new sponsorship by setting a course record at Spain’s Artenara Trail 30k with a time of 2:39:10.

“My dream has always been to be a part of Altra,” Hawks said.  “Not only are they founded in my home state of Utah but I absolutely love the product and am a firm believer in Zero Drop! I also love what the company stands for and plan to be with them for many, many years to come. Joining Altra was the best decision for my career and family, and we feel so fortunate!”

Hawks started his running career on Southern Utah University’s track and cross country teams. At SUU, Hawks became a Division 1 All-American athlete, running a 13:51 5k and a 28:53 10k, along with breaking many school records. With access to southern Utah’s national parks, Hawks trained on the trails and ultimately fell in love with the mountains, the desert and distance running.

After his collegiate career, Hawks shook up the ultra scene in 2016 with new course record at the high-profile Speedgoat 50k, his first official trail race. Following that win, Hawks went on to make a name for himself in his next five races by winning the Siskiyou Out Back 15k, the Red Mountain 55k, the Moab Red Hot 55k and placing second at the North Face Endurance Challenge 50-Miler and Chuckanut 50k.

Hawks was also selected to represent Team USA in the 2016 World Mountain Running Championships in Bulgaria—winning first team and fourth individually. He also set the FKT for the Zion Traverse‒a 48.4 mile route through Utah’s Zion National Park‒with a time of 6:50:49, beating the previous record by 30 minutes.

As a newly sponsored Altra athlete, Hawks is looking forward to an epic 2019 representing the brand. His plans include the Transgrancanaria 128k in Spain, Ultimate Tsaigu Trail 80k in China, Broken Arrow Skyrace 52k in California, returning to UTMB in France for the marquee 106-mile race, the Desert Solstice in Arizona and grabbing an Olympic Trials Qualifier with a road marathon.

Stay updated on Hayden Hawks’ accomplishments with Altra on the Team Altra Facebook page along with all of its Elite and Red Team athletes.