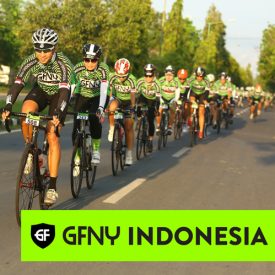 GFNY's first Asian race proved to be tough but beautiful

NEW YORK CITY, October 4, 2016 – Well over 1000 police officers secured the roads for the riders at the inaugural GFNY Indonesia on Lombok Island. Athletes from over 30 countries were racing the 180km course with 2054m of climbing. While the roads were exceptionally smooth, the hot and humid conditions made the up-to-25%-steep climbs particularly challenging.

The lead peloton tackled the first flat 50km at a steady pace before the southern hills invited attackers and separated the cream from the crop. A group of 15 riders emerged on the other end of the hills and was heading back past the capital of Mataram towards Pusuk Pass at km 145 of the race.

As soon as the road kicked up, Indonesian pro Robin Manullang and local Wisnu took the initiative. Manullang crested the top first with Wisnu still in sight. Once back down at the coast, racers still had to tackle 13 hills with gradients ranging from 10-25%. Wisnu never bridged back to Manullang, who crossed the line first in 5:03:35 to cash IDR 20,000,000. Wisnu followed 4 minutes back with Dikdik coming third.

“I just came off a training camp with the national team so it’s great to see the hard work paying off,” said a delighted Manullang at the finish to CNN Indonesia that covered the race. “I hope to line up and test myself against the Americans, Colombians, Italians etc. at the Campagnolo GFNY World Championship in NYC in May next year.”

“Riding through these tough hills in the south of Lombok was made much easier by the thousands of locals lining the roads and cheering us on,” said Fluhme. “GFNY couldn’t have had a better start in Asia. The hospitality and warmth of the people of Lombok Island is incredible. This race is not only interesting for locals or expats from the Southeast Asia region but for anyone who wants a truly incredible cultural experience. With the GFNY Asia Championship being held here in 2017, there’s yet another reason to join on October 1 for the 2nd edition of GFNY Indonesia.”

The 80km non-competitive course provided a scenic route with several shorter hills for riders who wanted to be part of GFNY but weren’t up for riding the tough 180km course.

While only a few riders were in the hunt for the overall win, many were aiming to finish among the top 10% of finishers in their category to qualify for a racer corral spot at the Campagnolo GFNY World Championship in NYC on May 21, 2017.

The 2017 GFNY Indonesia will be held on October 1, 2017 and co-function as the GFNY Asia Championship. As such, the top 20% of each age group will qualify for a racer corral start at the World Championship in NYC. Furthermore, the overall winners receive a fully paid trip to the NYC race to go head-to-head against the best GFNY racers of the world.

Up next on the GFNY calendar is GFNY Argentina, held in Argentina’s cycling hotbed, San Luis, on October 30. Shortly thereafter, the official GFNY End of Year Party will be held at GFNY Cozumel on November 13, rounding out a year of ten GFNY World series of races.