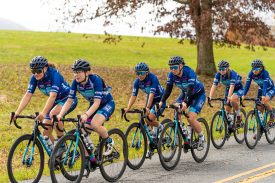 ROANOKE, Va. (November 2022) /ENDURANCE SPORTSWIRE/ – Virginia’s Blue Ridge TWENTY24 is announcing its transition back to a Union Cycliste Internationale (UCI) team. The team has a roster representing dynamic and diverse professionals in road, track, mountain biking, gravel, ultra, eSports, and para-cycling. Since its inception 18 years ago, VBR TWENTY24 athletes have earned 14 Olympic and Paralympic medals. The team is home to the only integrated junior mentorship program of its kind, developing young cyclists into internationally competitive athletes.

“TWENTY24 is a cornerstone program of American cycling. The team does heroic work in identifying future international caliber riding talent, providing them with unique development opportunities, and supporting them as they contend for World titles and Olympic medals,” said Brandon Quirk, CEO & President of USA Cycling. “Our belief at USA Cycling is that the US National Women’s Team will soon return to the #1 ranking in the world, and it’s due in no small part to the tireless effort of Nicola Cranmer and her team. We couldn’t be happier about the team’s return to the UCI ranks, and we look forward to many more years of productive partnership together.”

Visit Virginia’s Blue Ridge and the Virginia Tourism Corporation announced their joint support for the team in January 2022 and have since activated the community to lean in to support high-performance cycling and youth development, growing awareness of Virginia’s Blue Ridge as a destination for all things cycling and a unique training ground for athlete development.

“Over the last year, TWENTY24’s long-term partnership with Virginia’s Blue Ridge has produced notable positive economic development in the region while supporting the team with the latitude to explore all cycling disciplines while maintaining a strong focus on Zwift eSports. Our growth over almost two decades has delivered more opportunities for talent ID, especially in high performance, notably the time trial but also, in connecting young women to collegiate scholarships.,” commented VBR TWENTY24 General Manager, Nicola Cranmer. “The time is right for us to return to UCI designation with a mixed season of UCI races, track and gravel/MTB and Zwift racing. I’m excited about our roster of returning athletes and impressive new talent.”

“Supporting Virginia’s Blue Ridge TWENTY24 has helped us engage with our community and has further elevated our region as an outdoor destination. We are grateful to have them here and always excited to see them reach their goals!” said Landon Howard, President of Visit Virginia’s Blue Ridge.

Since moving its base of operations to “America’s East Coast Mountain Biking Capital,” in January 2022, the team has assembled a syndicate of local investors who are now stakeholders in women’s cycling, supporting VBR TWENTY24’s mission with high school athletics and collegiate scholarships, and hosting races and cycling-related events throughout the region. This includes the 2022 USA Cycling Amateur Road National Championships, 2022 IRONMAN 70.3 Virginia’s Blue Ridge, the 2022 Anthem GO Outside Festival, and the Virginia’s Blue Ridge Go Cross Cyclocross Race, with plans to bring more cycling events to the region in 2023.

“It really should be a case study for strategically targeted destination marketing,” says three-time Olympic gold medalist and team alumni Kristin Armstrong. “It’s a group of organizations who have dialed in on their competitive advantage, and they’re doing it right.”

This fall, Olympic cyclist and VBR TWENTY24 sports director Shelley Olds, who is also a founding member of the team, was announced as the head coach of the new Roanoke College competitive cycling program. Jennifer Valente (USA) made her mark this October, winning her first individual elite world title at the 2022 UCI Track World Championships and becoming one of the few riders to claim both World Champion and Olympic Champion concurrently. Plus, the team recruited its first regional junior athletes, Ally and Teagan Burrow.

About Virginia’s Blue Ridge TWENTY24: When the team was formed in 2005, the goal was to create a pathway for athletes to the 2012 London Olympics. In 2009, the team’s name became Twenty12, changing every four-year cycle, followed by Twenty16, Twenty20, and now Twenty24, representing the Paris 2024 Olympics. The Twenty24 program is responsible for developing many of the most successful American female cyclists to date. It has created opportunities for elite, junior development, and para-cycling athletes. Twenty24 has established a consistent athlete talent pipeline for road and track cyclists and additionally provides opportunities for athletes who excel in the virtual world of Zwift eSports and the new dynamic discipline of gravel racing. The team identifies and develops high-performance athletes and the next generation of competitive cyclists. Successfully aligning student-athletes with college scholarships through cycling and academics.

View all Releases by Nicola Cranmer