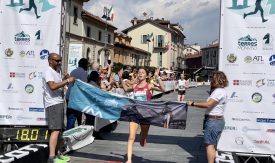 /ENDURANCE SPORTSWIRE/ – The 15th annual International U18 Mountain Running Cup was held Sunday, June 26, in Saluzzo, Italy and the U.S. U18 Mountain Running Team was on hand to participate with a full squad of 4 girls and 4 boys. The team looked forward to the challenge of the 4.4 kilometer course featuring 155 meters of ascent and descent.

The girls’ competition started at 10:15 a.m. and the boys set off to charge the castle at 11 a.m. The Saluzzo weather had the mercury hitting 75 for the girls and nearly 80 degrees for the boys, the humidity was creeping up making for tough conditions for the boys’ race.

As each country could only put one athlete on the line, Team USA put Rosie Mucharsky at the front followed by her teammates. A tight right turn and 500 meters of jockeying took place before the girls headed upwards on the course. Alyssa Sauro rallied to the front and after the initial climb through the castle, she was running shoulder to shoulder with Rebecca Flaherty of England. This game of cat and mouse would continue through the next mile of up with Flaherty putting a gap of 5 meters on the downhills, Sauro minding the gap on the uphills.

Sauro would go into the final meters tied with Flaherty before Sauro put down a dominant kick for the win in 18:03. USA’s Mucharsky-O’Boyle, and her teammates Milaina Almonte and Victoria Rodriguez traded places throughout the final portions of the course with Mucharsky-O’Boyle finishing second for Team USA in 18th, Almonte 20th and Rodriguez 23rd. Team USA’s score of 39 put them in fourth place among the 12 teams with England finishing for gold with 12 points, followed by France with 25 points and Italy with 27.

Porter Middaugh was Team USA’s runner on the start line and got a solid start position for Team USA with Benji Anderson close on his heels. Through the first climb Middaugh and Anderson kept close contact with the leaders cresting the climb in 3rd and 4th overall. They continued to push through the vineyards and onto the stone steps, not giving an inch. Team USA’s Garret Stickley was 4 places back fighting for position with William Wachter only a shade back through the first third of the course.

As the course worked its way back to the castle Middaugh and Anderson maintained position in 3rd and 4th with Stickley in the mix. Wachter experienced some significant breathing issues and lost contact with the group as they headed into the castle. As the course made its way back to the Piazza, the Italian team began to apply pressure and Middaugh fell to fifth place. Undaunted, Middaugh charged to the finish catching one of the Italians and securing a fourth place finish. Second for Team USA was Anderson in 7th.

The rising temperatures took a toll on Stickley and Wachter. The pair pushed themselves to the limit with Stickley collapsing at the line in 32nd place with Wachter not far behind in 39th. The boys’ team nearly made history with a team medal, but a tie resulted in a 4th place team finish just off the podium (France and USA each had 43 points, but France’s third scoring runner secured the bronze for France with a higher finish than USA’s third scorer). Italy A and B teams finished first and second with 14 and 31 points respectively.

Following comments from U.S. team members after the races.

Porter Middaugh | Avon, CO (4th place)
The race started out pretty conservatively and I stuck mid-pack to try and keep a good position. As soon as the climb started people started to fall back. I was trying to work my way up as best as I could and once we got to the grass section it got super tough. On the climb, I was probably in my best position of the whole race, I think I was in second or maybe third and then started to roll downhill. Unfortunately, I got caught on the uphill after a fast rolling downhill where I dropped back to fifth. Leaving the castle I just tried to roll as fast as I could; I had two runners in sight which was a good motivator. Thankfully, I was able to catch one of them and finished fourth.

Benjamin Anderson | Highlands Ranch, CO (7th place)
It was a good race for me. We were out fast for the first loop and then everyone kind of put the brakes on a little bit. Once we got to the top of the first cobblestone climb and into the castle the pace accelerated. I was pretty excited because I saw we had all four USA boys right there and we all just tried to stick together. Leading into the grass climbs I felt really strong although; I wish I could’ve pushed harder on the hills because I was worried about saving energy for the downhill. I was in fifth place leading into the final downhill and I just couldn’t move my legs any faster. Into the finish I just let gravity do its thing on the downhill and it carried me to 7th. I’m certainly hungry for more!

Garrett Stickley | Winchester, VA (37th place)
I was in the back of the start and had to hurdle a few people who tumbled down.Up the first climb, I was with the front of pack but once I got to the grassy area I started feeling a little rough on the top of the first hill. When we got to the bottom of the stairs I was still thinking I was relatively in that big front pack but I fell behind on the following downhill. My feet felt like they were actually on fire on the downhills, at that point I was letting gravity take over and did my best to just move my legs but I was very tired. Into the last stretch I was all out and I left it all out there. I think I put a good effort out there.

William Wachter | Highlands Ranch, CO (39th place)
I am really grateful for the experience. Looking back I took it out a little harder than I probably should’ve, which cost me but I think overall I put in a really good effort considering the circumstances and I was happy to do it with a great team.

Alyssa Sauro | Williamstown, WV (1st place)
The beginning it went out kind of fast which is what I was hoping for. The initial uphills were hard but we stayed as a pack. Going up the stairs I think we kinda spread out more. Once we got onto the grass that was where it really spread out and I just kind of stayed with the girl from England. I was kind of back-and-forth leading into the finish. I feel like we pushed hard and had a good battle between us. This was a fun race!

Rosie Mucharsky-O’Boyle | Denver, CO (18th place)
It went pretty well. I started off pretty fast for the first 500 meters and there was a lot of pushing and shoving from all the other teams. The first cobblestone section was pretty hot and difficult for me. From the castle to the top of the first major hill was probably one of the hardest parts for me. I was sort of doubting myself a little at that point. Once I hit the stairs I felt like I found a rhythm. My feet were so hot on the way down on the Dow hill but I had to put that behind me. I feel like the downhill is where I could really move my legs. I passed a lot of people in the last half mile of the downhill because I was focused on catching as many people as I could.

Milaina Almonte | Edwards, CO (20th place)
The starting pace was really intimidating and I started out towards the back. I had a hard time keeping up with the starting pace but once I got to the hills I was able to run a lot faster than I expected through the steepest parts of the course without overthinking it. By the time I got through the castle and onto the downhill I pushed really hard and pushed for the finish.

Victoria Rodriguez | Seven Valleys, PA (23rd place)
I feel like the race went pretty well, I felt really strong through the first cobblestone section and into the grass hills and I think the steep hills and the stairs took a lot out of me. Once I got through to the downhill I just took off and I felt really good at the finish. It was an amazing experience to be a part of this team.

Full results and article from the World Mountain Running Association at: https://wmra.ch/news/latest-news-from-the-wmra/982-j

Photos of the U.S. team on Google Photos.