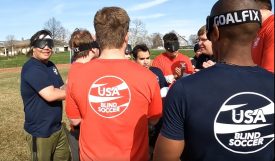 Colorado Springs, Colo. /ENDURANCE SPORTSWIRE/ As the newly-certified National Governing Body for the Paralympic sport of blind soccer, the U.S. Association of Blind Athletes (USABA) has appointed six individuals to act as sport ambassadors. Throughout the year, the five athletes and one coach will assist the organization in spreading awareness around blind soccer programming and other initiatives via digital content and in-person appearances.

Blind soccer has been part of the Paralympic Games since 2004 but the U.S. has never fielded a team in international competition. That will all change in the coming years as USABA develops a national team to compete as the host nation of the 2028 Paralympics in Los Angeles.

The five athletes selected as sport ambassadors are David Brown (Chula Vista, Calif.), Kevin Brown (Falls Church, Va.), Ricardo Castaneda (Fort Worth, Texas), Bailey Martin (Hubbard, Iowa) and Casimir Werda (Novi, Mich.). They are joined by coach Katie Smith (Columbus, Ohio). Four of the six ambassadors recently took part in a milestone moment for the sport as USABA conducted its first blind soccer talent identification camp since being certified by the U.S. Olympic & Paralympic Committee as the sport’s national governing body. David Brown, Castaneda, Martin and Werda were among 12 athletes who took part in the April 8-12 camp at the Maryland School for the Blind in Baltimore.

David Brown, 29, is a three-time Paralympian in track and field, and a 2016 gold medalist in the 100 meters. He was diagnosed with Kawasaki disease at 15 months old, resulting in glaucoma which eventually took his sight by the age of 13. Brown has participated in several blind soccer camps in the past year as he looks to add a second Paralympic sport to his resume.

Kevin Brown, 50, competed in soccer and other mainstream sports through high school and college. He has been legally blind since the age of 7 due to cone/rod dystrophy, a degenerative genetic eye disorder. Brown held the USA Track and Field record in the pentathlon and is also a member of the U.S. National Blind Hockey Team.

The 21-year-old Castaneda has been personally spreading the word about blind soccer for the past several years. Diagnosed with pars planitis at the age of 4, Castaneda developed glaucoma and was blind by the age of 15. He is currently studying kinesiology in college with plans to become a physical therapist.

Another college student on the ambassador team is the 19-year-old Martin. A freshman at the University of Northern Iowa where she is studying communications and sports relations, Martin’s love for sports grew even stronger after becoming visually impaired as a teenager. She has been involved in beep baseball, track, swimming, goalball and now blind soccer.

Werda, 38, lost his vision from an IED explosion in Iraq in 2007 while serving in the U.S. Army as part of Operation Iraqi Freedom. He has played goalball for many years and now holds a special place in his heart for blind soccer.

Smith, 28, is the soccer coach of Ohio Blind Soccer in Columbus. She began coaching the sport after attending a USABA blind soccer camp in 2018 and has been involved in numerous national development camps and clinics. In addition to her blind soccer coaching duties, Smith also organizes other recreational sports and activities for blind athletes within Columbus.

The mission of USABA is to empower Americans who are blind or visually impaired to experience life-changing opportunities in sports, recreation, and physical activities, thereby educating and inspiring the nation. A member organization of both the United States Olympic & Paralympic Committee (USOPC) and US Soccer, USABA is certified by the USOPC as the national governing body for the Paralympic team sports of goalball and blind soccer. Since its founding in 1976, USABA has reached more than 100,000 individuals through its multi-sport programming in eight sports. The organization has emerged as more than just a world-class trainer of blind athletes, it has become a champion of the abilities of Americans who are legally blind. In 2022, USABA expanded its offerings of endurance sports events with the launch of its Team Tethered Together program for visually impaired runners and their guides. Learn more at www.usaba.org/.

Soccer for the blind and partially sighted began in schools for people with visual impairments. Spain is considered to be the pioneer of the sport having started playing in the 1920s. The first national championships occurred in Brazil in 1974. In 2004, blind soccer made its Paralympic debut at the Athens Games. IBSA blind soccer is for players that have severe visual impairments. They are known as B1 athletes.