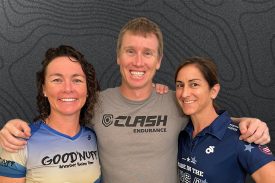 One Water Race, The Ultimate Proof of Human Capacity

On November 18th, registration opened for One Water Race, the world’s toughest endurance race, 23-25 August 2022. The interest is great and registrations have been received from all over the world. The United States has secured participation for its top team with world athletes and are ready for the first race to be held in the Stockholm archipelago. Registration is open until January 20th.

The first official One Water Race, August 23-25, 2022, a new concept that strives to establish the world’s toughest endurance race. The racers will face one of humanity’s toughest challenges, over land and sea, 250 km. A new era in endurance racing and climate activation – all for the benefit of our world waters and the award of $100,000 in prize money.

– We are overwhelmed by the reception One Water Race has received so far. We are very happy and proud to receive the opportunity to lift endurance racing to a new level, but above all how we through the race can create attention for our world waters, says Thomas Ogander.

One Water Race is a concept created to be the ultimate proof of human capacity, through a unique combination of adventure racing, orienteering, swimrun, ultramarathon and the distance and combination of running, swimming and navigation. One Water Race is a professional race and created for the best endurance racers in the world. A level required to meet the extreme challenge, 250 kilometers from Arholma in the north to Landsort in the south, a distance of 6 marathons running and swimming. Nonstop.

One Water Race is adapted for a maximum of 10 teams, each team consists of 3 racers and a team captain, with both sexes needing to be represented and be out on the course the entire time. One Water Race wants to reward the racers for the extreme effort required with one of the highest prize money in endurance racing, $ 100,000.

The admissions process is tough and it is of the utmost importance to ensure that participating teams have the required capacity. The first draft is now complete and Thomas Ogander can present the first team in One Water Race 2022 – Team No 1 from USA. The team has an impressive track record from both the Olympics and world championships in triathlon, adventure racing, swimming, pool & open water and swimrun with extensive routine and experience. The team and the participants meet all the requirements and expectations required to be on the starting line in One Water Race 2022.

– The team members complement each other and possess the merits, experiences and personalities required to take on this extreme challenge. It’s this level of teams and individuals who deserve to fight for victory. We are happy the word about One Water Race is spreading globally and that we now have a top American team in the race. We welcome Team No 1 to One Water Race 2022, says Thomas Ogander.

– Our goal is to win One Water Race. We have the capacity to be competitive against the absolute best in the world within this genre. But we know that our biggest challenge will be the Swedish teams, who know the terrain and have the opportunity to train in the archipelago. One Water Race has an important purpose, which we support to 100% and we look forward to coming to Stockholm, says Sara McLarty.

Teams:     Max 10 mixed three-man teams, consisting of women and men, from all over the world.