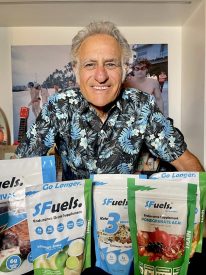 Raleigh, North Carolina (September 20, 2022)/ENDURANCE SPORTSWIRE/ – SFuels LLC, a leader in endurance sport nutrition is honored to announce that triathlon industry icon Bob Babbitt has joined the advisory board. As one of the sport’s most recognized figures, Bob will be instrumental in facilitating commercial growth plans, accelerating market awareness, and identifying key athletes and opportunities for SFuels revolutionary sport nutrition products. Since 2014, SFuels has been committed to creating clean nutrition products that provide the Right Fuel at the Right Time™ for both professional athletes and everyday people who want to improve their health and fitness.

“Over the past 40 years, there has been a significant transformation in endurance sports fuel.

Finally, we have an industry player revolutionizing fuel nutrition with a sharp focus on optimizing performance, enabling rapid recovery and supporting our longevity in these sports we love.” said Bob Babbitt, USA Triathlon and Ironman Hall of Famer. “I’m excited to be a part of a company that aligns with my passion for endurance sports and long-term health and wellness.”

Bob Babbitt began racing triathlons, in the late 1970’s. He completed his first Ironman Triathlon in 1980 on the island of Oahu and ended up completing five more before the event moved to the Big Island. Bob co-founded Competitor Magazine and the Challenged Athletes Foundation, and the infamous Breakfast with Bob video and podcast series. Bob has been inducted into both the Ironman Hall of Fame and the USA Triathlon Hall of Fame and remains an icon in the endurance sports community.

Already, SFuels has attracted several luminaries with Dave Scott, and legendary endurance-performance researcher Dr. Dan Plews as part of the company. “Over the past four years we’ve built and proved the SFuels portfolio at the pinnacles of the sport – and now we’re ready for scale. Bob is an admired figure in the triathlon industry with decades of experience and reach with triathletes around the world.” said Leighton Phillips, Co-Founder of SFuels. “SFuels is gaining an extraordinary asset in Bob and his industry-network will underwrite our aggressive growth aspirations and support the market demand for our products.”

Bob Babbitt is the co-founder of Competitor Magazine, the Co-founder of The Challenged Athletes Foundation, the creator of the Muddy Buddy Ride and Run Series, the creator and host of Competitor and Babbittville Radio, the creator of the Endurance Sports Awards Gala and the long-time host of the very popular YouTube show Breakfast with Bob. He served as a story consultant for the award-winning film ‘Emmanuel’s Gift,’ which was narrated by Oprah Winfrey, and he served as Executive Producer for two other award-winning films, We are Triathletes and Landis, Just Watch Me. He has authored seven books on endurance sports including coffee table editions celebrating the 25th, 30th and 40th Anniversaries of the Ironman Triathlon World Championship. Babbitt has been honored with the Jim MacLaren Award by The Challenged Athletes Foundation on their 25th Anniversary, The Shoemaker Media Awareness Award by The Paralysis Project of America , the Ron Smith Award from Triathlon Business International and he has been  inducted into the Carlsbad 5000 Hall of Fame, the USA Triathlon Hall of Fame and the Ironman Triathlon Hall of Fame.

SFuels was founded in 2018 by Leighton and Nicole Phillips and is committed to creating clean nutrition products that provide the right fuel at the right time for both performance athletes and active lifestylers. The company emphasizes the importance of performance in the moment but also long-term health and wellness. Their SFuels product line is carefully formulated with lower carbohydrates, is gluten-free, and contains no artificial flavors, colors or sugar alcohols. Its formulation allows for use in highly competitive sports, as well as, for active health-conscious consumers who wish to go longer every day. To learn more visit www.sfuelsgolonger.com.

View all Releases by Spike-FREE