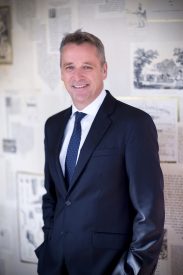 Kermode has been on the PTO’s Board of Directors since July 2020 and is one of the most experienced administrators in world sport. He moves into the role as Charles Adamo, the PTO Executive Chairman since 2016, steps down.

Chris started his career as a professional tennis player from 1985-1988, after which he held a number of leadership positions in tennis, rising to the role of Executive Chairman and President of the Association of Tennis Professionals (ATP). As the head of the ATP, Chris was responsible for promoting global tennis to the next generation of fans and attracting new audiences with innovative broadcasts and formats.

Under his leadership, he transformed the ATP’s season-ending World Tour Finals at the London O2 Arena into the largest and most successful indoor tennis event in the world and launched the Next Gen Finals to showcase the world’s top tennis professionals aged under 21. During Kermode’s tenure at the ATP, the amount of prize money paid in men’s professional tennis increased more than 70%.

“It is a privilege to be given the opportunity to help accelerate the PTO’s mission and support the PTO Professionals. Over the last two years we have made great strides in establishing our events and lifting the triathlon broadcasts to the next level. The PTO business model and the triathlon market is compelling, with many similarities to professional tennis which began to boom once the professionals started to act together to promote the sport through expanding their fan base. Professional triathlon has enormous potential to develop into a mainstream sport. This will require a unified front from the professionals and aligned interests with the commercial partners. That is why the unique ownership structure of the PTO, where the professionals and investors have ownership interests in the success of the venture, is so valuable and why I am confident that the PTO can be the catalyst that turns triathlon into a success and a mainstream sport.”

“In 2016, when I first began to help professional triathletes who had a vision to have their own organisation and transform the sport, I expected it to be a 6–12-month project. Now nearly seven years later it is a joy for me see how the PTO has established itself and PTO Professionals, against all odds and expectations, have been able to unite to transform the sport. With a committed investor base, dedicated management team and athlete unity so much has been accomplished and even greater milestones are on the horizon. Under the able leadership of Chris as chairman, the PTO is poised to build on its accomplishments and take our sport to new heights.”

Tim O’Donnell, PTO Athlete Board member and one of founding athlete members of the PTO, stated, “On behalf of all PTO Professionals, we are grateful for Charles’ leadership in helping guide the PTO and giving professional triathletes their own organisation. Without his perseverance, there would be no PTO – he believed in our vision when no one else did and in the face of doubt and criticism refused to be deterred. A big thanks to Charles from all PTO Professionals.”

The PTO is a new body co-owned by the professional athletes, seeking to elevate and grow the sport of triathlon and take it to the next level. The inaugural PTO Tour race schedule for 2022 included: the first-ever PTO Canadian Open (July 23-24); the second edition of $1.5M Ryder Cup-style Collins Cup (August 20), which sees Team Europe take on Team US and Team International; and the first PTO US Open (September 17-18). Each Open carries a minimum prize money of $1M and will be raced over 100km (2km swim, 80km bike and 18km run). In 2023 and 2024, the PTO Tour plans to expand with the PTO European Open and the PTO Asian Open, alongside their US and Canadian equivalents and the Collins Cup.