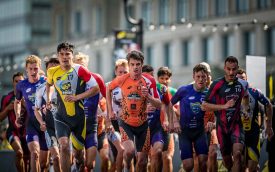 /ENDURANCE SPORTSWIRE/ – Super League Triathlon (SLT), the world’s fastest swim-bike-run series, has partnered with Story10, the global sports video production and distribution agency, to increase international exposure of their 2022 races. The partnership includes the Arena Games and Championship Series, as well as wider projects, such as their Every Second Counts documentary series.

The 2022 season gets underway in April with the Arena Games Triathlon powered by Zwift, a trailblazing concept that blends real-life and virtual racing. This year will crown the sport’s first ever esports World Champions through a partnership with World Triathlon. Story10 will amplify content from all areas of the sport, including race highlights, feature stories on athletes and wider initiatives and activations, as well as other supporting event content, to help bring audiences closer to the action.

Super League Triathlon’s Chief Marketing Officer, Joe Edwards, said: “This is a big year for Super League Triathlon as our rapid growth continues, starting with Arena Games Triathlon events in Munich, London and Singapore and finding the first esports World Champions. Later in the year we will visit even more global destinations with our Championship Series.

“Storytelling is at the heart of everything we do and Story10 are in a unique position to help us deliver that to a global audience and to provide exposure to our events and athletes through their extensive network and expertise and we very much look forward to continuing our relationship with them.”

James Dobbs, Managing Director of Story10’s parent company SNTV, said: “Super League Triathlon has created a fantastic series of swim-bike-run races that will ensure that triathlon as a sport remains relevant to audiences worldwide. Their combination of indoor and outdoor competitions, taking place both in real life and virtually, is hugely exciting and is a signpost for where triathlon and sports in general are heading.

“Being able to amplify their content through Story10’s global distribution network, will ensure exposure and engagement, whilst delivering high quality sporting content to global audiences.

“The success and growth of SLT’s race events will provide a real platform for current and future triathletes and Story10 is excited to provide the international engagement that will help deliver that growth.”

Super League Triathlon (SLT) is the world’s premier swim-bike-run Series, pitching the very best athletes against each other in quick and exciting race formats in fantastic destinations across the globe.

The Championship Series takes place from August-November with the best triathletes on the planet doing battle over game-changing formats which are redefining the sport for a modern audience.

Super League’s Arena Games Triathlon is a dynamic new esports format which blends in real life and virtual racing to deliver an immersive viewing experience via a unique partnership with Zwift. It will crown official triathlon esports World Champions thanks to its ground-breaking partnership with World Triathlon.