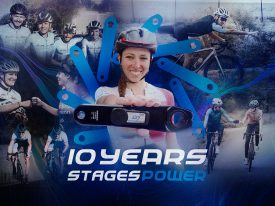 (Boulder, CO – July 12, 2022) /ENDURANCE SPORTSWIRE/ – Stages Cycling, a leading cycling technology company, is celebrating the 10th anniversary of Stages Power meters. Stages launched its first power meter for outdoor bikes July 12, 2012. Since then Stages Cycling has produced millions of power meters and has grown from a small company to a global leader in the cycling technology industry.

Stages CEO and founder Jim Liggett said, “This is a huge milestone for our company, and a credit to the hard work, passion and dedication of Stages team members. The creation of Stages Power represents the spirit of innovation and creativity that exists in our company and our amazing employees. The Stages Power meter that launched 10 years ago defined us as a business and sparked other new products and initiatives. At Stages, Power leads the way, and we’re proud that Stages Power has helped millions of athletes and cyclists worldwide accomplish their goals.”

The Stages Cycling brand was launched in 2012 with the mission of bringing power to every rider, no matter where they ride or train. Up until that point, power meters were cost-prohibitive and difficult to use. Stages set out to make incredibly accurate power meters that were accessible, affordable, and easy to install.

When Stages began, five core team members set out to disrupt the cycling technology industry. Long before they were Stages engineers, innovators, or business leaders, the core team members were avid cyclists. They valued the benefits of power and envisioned a way to make power accessible for every rider.

How Stages Power Meters Are Made

Sixteen individual steps go into making an alloy power meter and even more steps are required for carbon cranks. The production process involves a high degree of precision in each step. Every Stages Power meter is made in Boulder, Colorado.

Over the past 10 years, Stages has continued to innovate and launch new products in its power meter line and branched into other categories with Stages Dash GPS cycling computers and Stages SB20 Smart Bikes and supporting software with the Stages Cycling app.

At Stages power meters inform and dictate the new technology Stages creates. Each new product launched since the Stages Power meter, including Stages Dash and Stages SB20 smart bikes, was designed with power top of mind. This philosophy is why the SB20 comes equipped with Stages dual-sided power, and why Dash has a bright full-color screen with a color wheel to indicate power zones. Stages has continued to add power to new drivetrains and crank arms, including the new Dura-Ace 9200 and Ultegra 8100. Power also informs innovation for new technology for indoor studios, like real-time group display, behind-the-scenes data collection, and post-workout emails.

As part of the 10 Years of Power celebration, Stages wants to hear athlete’s power stories. Anyone with a Stages Power meter can participate in this Stages SB20 Smart Bike giveaway between July 12-14 by doing the following:

Stages will share the best photos and stories starting July 15. The best one will win a Stages SB20 Smart Bike (must be in the US to win).