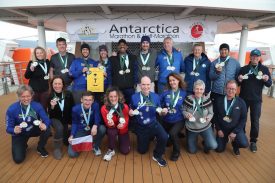 Boston, MA (May 5, 2022)/ENDURANCE SPORTSWIRE/ – After years of litigation required to recognize and protect their innovative globally respected brand, Marathon Tours & Travel (MTT) officially received the registered trademark designation for its Seven Continents Club® (SCC). MTT established the SCC in 1995, when the inaugural Antarctica Marathon®& Half-Marathon made it possible for runners to conquer a marathon or half-marathon on all seven continents.

One of our early SCC adopters recalled, “I was reading the latest issue of Runner’s World and there was an article about the first marathon in Antarctica (1995) – somewhere I always wanted to go. I was able to get into the second running of the Antarctica Marathon® and it was on that trip when I decided to join this new, unique club and run a marathon on all seven continents.” Fast forward 27 years later and the SCC has grown from a short list of dedicated runners to 8108 members.

A significant trend we see is the increase of women SCC Members and Finishers. Stephanie Madsen recalls, “When I discovered the Seven Continents Club®, I could not believe there was a group of people like me who thought it was a cool objective to run on all seven continents. Slowly, I started planning and decided I could make my objective even more interesting: run all seven in one year!”

The SCC membership spans across 87 countries. In addition to North America, a significant number of members also reside in Australia, China, Germany, New Zealand, Poland, South Africa and the U.K. The SCC is experiencing rapid expansion around the globe as more and more runners seek new goals.

“Whether you are one of our original adventurous members, number 8108 who just joined or have been thinking about joining…you can be confident you are with the leading recognized global running club,” noted Founder and CEO Thom Gilligan.

Being a member of the SCC, the only frequent traveler club for runners, also provides special VIP services to international globetrotting distance runners. Services include personalized guidance on the best destination races to meet the runners interest, budget and help them successfully complete their goals. More about the SCC can be found on www.sevencontinentsclub.com. Connect on Facebook.

Founded in 1979, Marathon Tours & Travel (MTT) was one of the first global companies to specialize in travel services specifically for runners. Located in Boston, the home of the world’s oldest marathon, MTT is the official North American travel agency for many of the world’s most popular running events including the BAA Boston Marathon, TCS London Marathon, TCS New York City Marathon, Antarctica Marathon® and many others. More information is available on www.marathontours.com.