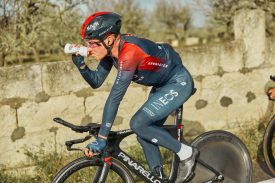 /ENDURANCE SPORTSWIRE/ – Science in Sport’s Beta Fuel range is leading a revolution in endurance fuelling, having famously powered Chris Froome’s sensational 80km solo ride on Stage 19 of the 2018 Giro D’Italia – widely believed to be the elite athlete’s greatest ever feat on a bike. And now, Science in Sport are rewriting the rulebook once again with an unprecedented new study using the most complete and innovative fuelling solution on the market.

This new science, published in the Journal of Applied Physiology, set out to test carbohydrate oxidation, gastrointestinal discomfort, and exercise capacity when taking on carbohydrates in liquid (drink), semi-solid (gel), and solid (jelly chew) forms as well as a combination of the three. Crucially, researchers tested a feeding strategy where athletes consumed 120 grams of carbohydrate per hour, significantly higher than the current recommended intake of 90 grams per hour.

“This study changes everything we thought we knew about high carbohydrate and endurance nutrition and how to fuel winning performances. Born out of elite need, Science in Sport has delivered a superior product with world-leading science. We can now educate endurance athletes on how much carbohydrate intake they should really be aiming for, which completely changes the game for performance potential in endurance racing and redefines limits in an unprecedented way. This is the future of endurance fuelling.”

“We are hugely excited by the results provided by Science in Sport Beta Fuel.  Our data suggest that endurance cyclists can consume up to 120 grams of carbohydrates per hour with no reported symptoms of gastrointestinal discomfort. Considering that we observed no differences in carbohydrate oxidation between liquid, gel, chew or a combined approach,  the SiS Beta Fuel range can be tailored to an athlete’s individual fuelling preferences. There is no doubt that this highly flexible and functional fuelling strategy will lead to improved performances for all endurance athletes.”

About Science in Sport

SiS, founded in 1992, has a core range comprising gels, powders and bars focused on energy, hydration and recovery. SiS is the official sports nutrition supplier to many professional cycling teams and organisations including INEOS Grenadiers, Manchester United FC, England Lionesses, Legion of Los Angeles and USA Triathlon. SiS supplies more than 100 professional football clubs in the UK, Europe and USA and is an official partner to the Rock ‘n’ Roll Marathon Series.