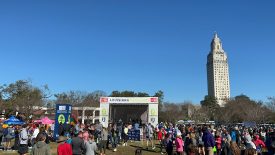 BATON ROUGE, La. /ENDURANCE SPORTSWIRE/ – Under ideal running weather the Louisiana Marathon and Half Marathon runners braved the 26.2 and 13.1-mile distances on Sunday through downtown Baton Rouge. Crowds of racers gathered in front of the state Capitol at daybreak, and at the strike of 7:00 AM, they took off down N. Fourth Street for the 12th year of the event.

Following Saturday’s events, the Full and Half Marathon paved another day of clear skies and cool weather conditions. Hundreds of spectators, volunteers, and staff lined Fourth Street to cheer on thousands of runners as they blazed across the finish line and into A.Z. Young Park for beer, jambalaya, and gumbo at the Finish Festival.

The start of the Sunday races concluded a successful weekend for the event. In his debut at the Full Marathon distance, 27-year-old Fisher Hamilton from Lake Charles took the Men’s Marathon crown with a time of 2:32:40. Dan Lemelmen, a 32-year-old from Brooklyn, NY, followed in second place with a time of 2:39:59. Joe Huyett, 31, of Fort Collins, CO rounded out the men’s podium with a 3rd place finish in a time of 2:44:11.

The Men’s Half Marathon kicked off the day’s top finishers with 41-year-old Jake Stout of Brush Prairie, WA taking the win in a time of 1:10:52. He was followed by 25-year-old Carlos Zervigon of Baton Rouge, LA in 1:13:21. 17-year-old William Fell of Ridgeland, MS was the third-place male finisher with a time of 1:16:46.

Kristin Wenstrom of Covington, LA, clocked in at 1:22:20 as the Female Champion of the Half Marathon. 27-year-old Emma Newton of New Orleans came in second place overall with a time of 1:24:45. 46-year-old Claudia Brinkruff of Greenfield, IN, who was Saturday’s Female Quarter Marathon Champion, finished in third place with a time of 1:25:50.

Sunday’s events ended the action-packed weekend for the 12th Annual Louisiana Marathon. The races across all distances hosted runners from 47 states plus Canada, Mexico, Honduras, Germany, and the Czech Republic.

The full race results and other information about the Louisiana Marathon can be found online at www.TheLouisianaMarathon.com

ABOUT FRESHJUNKIE RACING: FRESHJUNKIE Racing (FJR) is an endurance event production company specializing in road running races and triathlons.  Currently, FJR produces 19 events annually: 12 in Louisiana, 1 in Mississippi, 3 in Alabama, 2 in Missouri, and 1 in Florida.  While 13 of the 19 events are company owned events, FJR offers event services for organizations looking to outsource the production of their running race or triathlon.  FRESHJUNKIE Racing prides itself on attending to the small details.  Because they matter.  We are a production company made up of athletes that produce events for athletes. We know what it means to plan, train for, and participate in events and we know what the small details are.  From initial planning, permitting, and overall event operations to graphic design, marketing, and video production, we are a complete shop.  We are exhaustive in our preparation and comprehensive in our execution so that athletes can participate in experiential events they will remember for years to come.

View all Releases by FRESHJUNKIE Racing