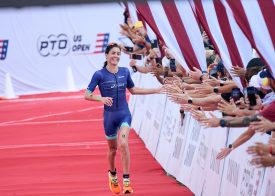 London, UK /ENDURANCE SPORTSWIRE/ –The Professional Triathletes Organisation (PTO) announced today the successful completion of a Series B funding round, led by Divergent Investments, an innovative private equity fund. Other investors in the round were majority investor Sir Michael Moritz, as well as Warner Bros. Discovery, a leading global media and entertainment company.

Divergent invests exclusively in companies which have a positive effect on customers and communities and where they are able to generate superior, sustainable and risk-adjusted returns. With the athlete-owned PTO starting to deliver on its vision to elevate and grow the sport of Triathlon by hosting high profile, high prize fund annual races aired to a global broadcast audience, it represents the perfect opportunity for Divergent to add value across its five key operational areas of expertise: Private Equity, Responsible Investing, Machine Intelligence, Capital Markets and Behavioural Science.

Since investing in the PTO in May 2022, Divergent has been working closely with the company to strengthen its sustainability footprint, to build its machine intelligence systems and to explore new lines of business.

“As an athlete-owned body, the Professional Triathletes Organisation represents the ideal investment into an “emotional asset” which aims at inspiring people to believe and give the best of themselves. It enables Divergent to stand shoulder-to-shoulder with superhuman endurance athletes who are on a mission to take their sport to the next level – both professionally and commercially. A mission that is totally aligned with Divergent’s investment philosophy of ‘profit with purpose’. We are thrilled to be working with such a high quality management team who understands and embraces our value creation strategy.”

Warner Bros. Discovery, which signed a landmark, multi-year broadcast partnership with the PTO in July, have also invested in the Series B Round, extending their relationship with the organisation to be a strategic partner for its athlete-led approach and future growth plans.

Andrew Georgiou, President and Managing Director of Warner Bros. Discovery Sports Europe, said: “Working closely with rights-holders is a fundamental part of Warner Bros. Discovery’s strength in sport and the foundation of how we use our scale, expertise and platforms to help grow sports and their events. This is at the heart of why we are investing in the PTO and deepening our relationship, providing the opportunity to sit alongside them and have a real impact in driving and developing its properties and the sport of triathlon more widely.”

“We have seen the potential of the PTO Tour and the benefits we can bring the sport first hand since our media rights relationship began in 2021, expanding this year to present the first year of the Tour on our channels and platforms across Europe. Triathletes have some of the most compelling stories in sport, so we are excited by the opportunity to provide them with an even greater platform and chance to connect with today’s fans and new, broader audiences into the future.”

“The successful raise is further validation of the PTO’s athlete-led model and broadcast and content-led strategy. Our multi-year broadcast agreement with Warner Bros. Discovery was a significant milestone when we announced it in July [2022], and their decision to become a first-time strategic investor in the PTO is testament to the longer term opportunity of growing and commercializing Triathlon.”

“There is still much to do; we are only at the start of our journey, but I am confident that we are on the right path. This is an exciting opportunity to modernise a sport and give these ultimate endurance athletes the opportunity to showcase their extraordinary talents, while being rewarded appropriately.”

In its first season, the 2022 PTO Tour delivered on its goal to bring long distance Triathlon to a broader audience, including a global dedicated TV and streaming audience of 23.1 million through multiple top-tier broadcast partnerships. 2023 will also see an expansion on the PTO Tour, with the inaugural staging of the PTO European and PTO Asian Opens.

Having been the sole investor in the PTO Series A round, Sir Michael Moritz is doubling down following the success of the first PTO Tour season.

This announcement follows news in March this year that health-focused venture fund, Eckuity, made a strategic investment in the PTO to access the sport’s high value customer base and build a distribution platform to companies developing innovative health, wellness, and medical tech products.

Reflecting on the Series B round, PTO CEO, Sam Renouf, said:

“We are excited to announce the addition of new strategic investors Divergent Investments alongside Warner Bros. Discovery and the continued investment from Sir Michael Moritz; plus existing partners Eckuity. The completion of our Series B round is a reflection of the progress the PTO Tour and our athletes have made this year. We are honored that Divergent chose the PTO as its first ever investment, recognizing the unique opportunity of becoming co-owners of a sport with the world’s greatest athletes.”

The PTO will announce the full 2023 PTO Tour race line-up and dates early in the New Year. This will include exciting opportunities for amateurs to get involved again, thanks to a range of age-group races being held at the same venues.

The PTO is a new body co-owned by the professional athletes, seeking to elevate and grow the sport of triathlon and take it to the next level. The inaugural PTO Tour race schedule for 2022 included: the first-ever PTO Canadian Open (July 23-24); the second edition of $1.5M Ryder Cup-style Collins Cup (August 20), which saw Team Europe triumph over Team US and Team International; and the first PTO US Open (September 17-18). Each Open carried a minimum prize money of $1M and was raced over 100km (2km swim, 80km bike and 18km run). They also included exciting opportunities for amateurs to get involved through a range of age-group races held at the same venue.

Its founder, Francis Bento, is an experienced investor with a 20-year, blue-chip track record as a global investor and philanthropist. The core team around him has a disruptive mindset whereby state-of-the-art technology is the bedrock of the investment approach. A proprietary ESG-driven investment framework, big-data-enabled research, capital markets analysis and behavioural science are among the tools embedded in Divergent’s processes to drive value creation and manage risk. Divergent seeks outstanding private equity returns through its operational approach. At the same time, putting the care of people and the planet is at the very core of its investment strategy.