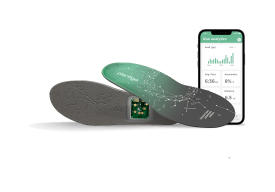 Goal-driven athletes can now accurately track their impact movements like world-class athletes and teams such as Andre De Grasse and the Los Angeles Dodgers.

VANCOUVER, BC /ENDURANCE SPORTSWIRE/ – Plantiga, a movement diagnostics company, today launched its exclusive membership program designed for goal-driven athletes who use impact-based activities, such as running and jumping in their training and competition. Plantiga’s proprietary technology, data analytics, and personalized coaching allow athletes to reduce and recover from injury and reach the startline of their next event more prepared than ever before.

“From our perspective, being an athlete is about your mindset and identity,” said Plantiga’s co-founder and CEO, Quin Sandler. We’re launching this membership to help athletes move more efficiently, helping them reduce and recover from injury to reach their competitive goals.”

Years of testing and validation from the world’s top human performance organizations, from NBA teams to the Military, have allowed Plantiga to expand access to athletes who run, jump and use impact activities in their training and competition. “Our 1:1 coaching and data analysis is core to our offering,” said Sandler. Plantiga’s movement coaches are highly credentialed biomechanists, kinesiologists, and strength and conditioning coaches. They work within an athlete’s current training and coaching team to provide an additional layer of insight into how movement plays a role in their training and racing load.

The cost of Plantiga’s membership is $30/month plus the one-time charge for the proprietary Plantiga insoles and hardware platform. The membership launch comes after securing recent financing and adding athlete investors like Thaddeus Young of the San Antonio Spurs and Will Fuller of the Miami Dolphins to their team.

“We’re building much more than wearable devices. Our members join a community of athletes driven to live longer and healthier lives. We place the human at the center of everything we do through dedicated coaching so that our members not only understand their data but can apply it to their unique goals.” said Sandler.

“Using Plantiga allows me to get feedback from my body before I notice anything is wrong. The data I receive is so robust, it helps to identify tightness, asymmetries, and changes in my gait well before I see them and before they become pathologic,” said McBride.

Visit plantiga.com to request access to their membership platform.