Perform Emerges from Stealth with $1.2 Million in Funding and Partnership with Running Legend Meb Keflezighi to Democratize Coaching 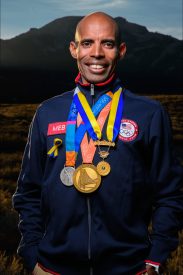 SAN FRANCISCO, California /ENDURANCE SPORTSWIRE/ – Perform, a startup that helps runners reach their goals with a personal running coach and smart training app, today announced that it has raised $1.2 million in pre-seed funding led by defy.vc, with participation from Techstars, the Chief Product Officer of Calm, the former Chief Product Officer of Uber, the co-founder of Fitbod, and other technology executives.

Alongside the funding, the company announced that Meb Keflezighi, 2004 Olympic silver medalist and winner of the 2014 Boston Marathon and 2009 New York City Marathon, and Merhawi Keflezighi, who manages world class endurance and track and field athletes as CEO of HAWI Management, have joined the company’s board of advisors.

There are about 75 million runners in the United States, according to a 2021 report from Nielsen Sports, yet few utilize a running coach due to lack of access and high cost. Co-founders Eric Brownrout, Christian Mathiesen, and Leonard Adler, endurance athletes who have worked for leading technology companies such as LinkedIn, built Perform to address these challenges by combining human coaching with technology that provides benefits to both coaches and athletes. Perform’s technology, which includes a mobile app and proprietary coaching software, allows the company to deliver personalized coaching at breakthrough prices to athletes at scale.

Athletes who sign-up for run coaching with Perform are matched with a coach who creates a personalized training plan and provides accountability and support through ongoing video calls and messaging. Perform’s coaching product builds on the expertise and learnings from Perform’s initial product, an AI-powered music app that motivates and inspires athletes by adapting in real-time to their heart rate and pace.

Perform has seen an enthusiastic response from the running community since its beta launch earlier this year. The company’s growing customer base includes new runners seeking to incorporate running as part of a healthy lifestyle and runners training for fall races including the Chicago Marathon and New York City Marathon. Perform is also receiving strong interest from coaches who want to join the company’s coaching team, which includes pro runner Colin Bennie, the top American finisher at the 2021 Boston Marathon, and Cal Calamia, the first winner of the San Francisco Marathon’s non-binary+ division in 2022.

Meb and Merhawi will have important roles in Perform’s next phase of growth, including advising the company on new coaching and training services as well as introducing Perform to new audiences in the running industry.

“I’m excited to join Perform as it provides me with a great opportunity to share what I’ve learned during my running career and enables me to help runners across the world achieve their goals,” said Meb Keflezighi, a four-time Olympian. “I’m looking forward to working with Perform to make coaching more accessible to runners of all backgrounds and abilities.”

“We’ve been inspired by the response from the running community and our customers,” said Eric Brownrout, CEO of Perform. “We’ve seen how Perform’s affordable coaching addresses gaps in today’s market and makes a real impact in athletes’ lives. And not just serious athletes, but an increasing number of new runners who have never had a coach before. We couldn’t be more excited to work with Meb, Merhawi, and our partners to take Perform to the next level and share it with more athletes.”

Perform’s mission is to make personalized coaching accessible to all runners. Perform’s running coaches and smart training app deliver the most affordable, convenient, and intelligent way for runners to train and achieve their goals. Perform is a San Francisco-based startup backed by investors including defy.vc, Techstars, and the Chief Product Officer of Calm; and advisors including running legend Meb Keflezighi. For more information, contact us at hello@joinperform.com or visit joinperform.com.

Mebrahtom “Meb” Keflezighi is widely acclaimed as one of the greatest runners of our time and is the only man in history to win the New York City Marathon, the Boston Marathon, and an Olympic medal. He is the author of two New York Times bestselling books, founder of the MEB Foundation, and is committed to helping runners become the best versions of themselves and nurturing the sport of running for the next generation. For more information visit marathonmeb.com

HAWI Management was founded in 2005 as a full-service athlete representation company that prides itself on integrity, innovation, commitment, excellence and strong athlete-agent relationships. In 2015, founder Merhawi Keflezighi was named one of the Top 50 Most Influential People in Running by Runner’s World Magazine. Additionally, Merhawi sits on the Board of Directors of AthleteBiz, Camber Outdoors, and the MEB Foundation. For more information, visit HAWImanagement.com

View all Releases by Perform