Nearly 2,000 Runners Kick Off The Holiday Hustle at Pumpkin Spice Half Marathon 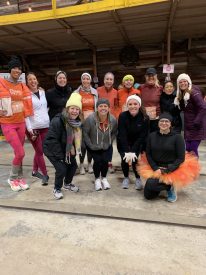 Autumn vibes activated as participants log miles, indulge in pumpkin delights and give back to the Fort Worth community

FORT WORTH, Texas /ENDURANCE SPORTSWIRE/ – As holiday lights begin to twinkle across the Metroplex, the season for festive gatherings was officially kicked off at the Pumpkin Spice Half Marathon in Forth Worth on Saturday. The seventh annual run, which also featured a 10K and 5K option, had nearly 2,000 runners dashing across the Trinity Trail. Across the finish line, fall-themed medals, tastes, and treats awaited participants. Fort Worth-based nonprofit Hands of Hope Tarrant County was the beneficiary of the race. The Pumpkin Spice Half Marathon is set to return in 2023.

“Run Project’s mission is to help you run local and give local. As we enter Thanksgiving week, it’s important for us to remind our community that, along with the pumpkin spice lattes and special time with family, we should take a moment to remember those who are in need right here in Fort Worth,” said Run Project Owner and Fort Worth native Tanna Wood. “Hands of Hope conducts full-time street outreach to the unsheltered homeless in Tarrant and surrounding counties, and we are thrilled to bring awareness and support to the great work they do here in our city. Our runners’ miles really mean something here at the Pumpkin Spice Half!”

The post-race party was packed full of seasonal delights, including Yuengling Hershey’s Chocolate Porter Beer for those over the age of 21, a Pumpkin Pie Eating Contest, and pumpkin spice treats from Fort Worth businesses including Mindy Lou Pies, Melt Ice Cream, and Brewed Coffee, the beloved brunch destination in Fort Worth. Runners were awarded shirts and medals with local, flavorful imagery including cowboy boots, longhorns, and pumpkin spice ingredients.

The Pumpkin Spice Half Marathon is just one of many events in Texas’ premier race series put on by the Run Project. The series will turn its sights from pumpkins to pancakes, kicking off 2023 with the Hotcake Hustle on Jan. 7 in Plano.

Run Project is Texas’ and the southwest’s premier race series. Run Project represents the top 2% of running events that are locally owned and operated in the Texas area. They are part of the Racing Systems, Inc family of brands. The brand is authentically local and globally minded, creating world-class, locally-owned events that benefit causes in the Dallas-Fort Worth area. For more information about Run Project, visit www.RunProject.org and follow them on Facebook and Instagram.

View all Releases by Megan