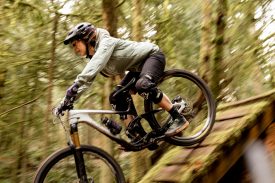 Campaign highlights riders’ commitment and the growth of women’s cycling

NEWBURY PARK, Calif. /ENDURANCE SPORTSWIRE/ – Liv, the brand dedicated to getting more women on bikes, today introduced the third installment of its global brand campaign “Liv Committed,” introducing “All In.” Featuring Liv Racing athletes, global ambassadors, and women cyclists, the new campaign explores the many expressions of commitment, and speaks to inclusivity and the advancement toward equity in cycling.

“As a brand committed to women, we will continue to actively seek out ways to involve more women both in the sport and in the industry,” said Bonnie Tu, Liv founder and Giant Group chairperson. “To us, going all in means welcoming all women to the sport of cycling  ― whether riders are new to the sport or at the competitive level.”

The campaign hero video features Liv sponsored athletes including 13-year-old Liv off-road team rider Tayte Proulx-Royds, Paratriathlete and two-time Paralympic gold medalist Allysa Seely, Liv employee Vanessa Lebrun, Liv global ambassadors and members of The Black Foxes, the international collective of Black cyclists, Alexa Everson and Shequaya Bailey. From finding big air at the 2021 Dark Horse Invitational and winning Paralympic gold in Tokyo, to bikepacking in Utah, each rider speaks to distinct moments of dedication to their fitness and the sport, sharing what going “all in” means to them.

Seely made history at the Rio 2016 Paralympic Games and five years later was the first woman to win back-to-back Paralympic gold medals in triathlon. Seely’s long list of achievements go beyond the Games. Diagnosed with Chiari II Malformation, basilar invagination, and Ehlers-Danlos Syndrome in 2010, she underwent surgery to amputate her left leg below the knee in 2013. “No matter the circumstances, effort required or pain – I won’t back down. Going all in for me is when things get really challenging and I double down on myself,” says Seely.

Bailey, who started out cycling as a means of transportation, found biking took her places further than she could have initially imagined, from traveling, to becoming a mentor and community leader. “We need to see more faces like ours behind and in front of the screen, and that representation matters. Shaping the stories, sharing knowledge, and showing people that so much is possible,” said Bailey. “All in means all of us, and I’m proud to be part of this campaign elevating this important conversation.”

Everson shares her experience and guidance in cycling to make it less intimidating and more accessible to underrepresented communities. “I want to share my experiences and guidance in cycling so that future generations of BIPOC will see our participation in the outdoors as normal and essential to our well-being. ‘All in is when we recognize our own power, and step into it.”

As part of Liv Committed, All In, Liv will welcome entries for a chance to win a trip for two and VIP experience at the Tour de France Femmes avec Zwift including VIP viewing, Liv swag bags, special access and lodging. Sweepstakes details will be featured beginning April 19.

“The addition of a women’s Tour de France to the UCI Women’s WorldTour calendar is a big step forward for women’s cycling, but there is still more work to be done as it relates to achieving equity for all women in our sport,”said Phoebe Liu, chief branding officer of Giant Group, which includes Liv, Giant, Momentum and CADEX brands. “This campaign comes back to the core of our brand and speaks to the power in pushing our personal limits.”

The Liv Committed, All In campaign will be distributed globally throughout 2022 in more than 50 countries, including the U.S., United Kingdom, France, Germany, Australia, Canada, Taiwan, Japan, Korea and The Netherlands. It will run across digital platforms around the world, reaching an estimated 16 million people.

Liv is the only comprehensive cycling brand in the world dedicated solely to women. Founded in 2008 by Bonnie Tu as part of Giant Group, Liv creates innovative bicycles and gear to fit and perform at the highest level. Liv aims to empower all women who ride–from beginners to pros. With a global team of retailers, athletes, and events, plus an increasing digital presence focused on riding skills, bike maintenance, nutrition, travel, and other experiences, Liv strives to grow the community of women in the sport and be the number one resource for women cyclists around the world. Learn more at liv-cycling.com.