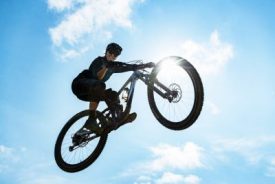 Campaign Highlights Enduring Spirit of Cyclists Around the Globe

NEWBURY PARK, Calif. (March 23, 2021) – Liv Cycling, the company dedicated to getting more women on bikes, today introduced the second installment of its global brand campaign Liv Committed, celebrating the resilience the cycling community has shown over the last year and the growing number of riders who are turning to bikes for solace and joy.

“The coronavirus pandemic has challenged all of us immensely,” said Bonnie Tu, founder of Liv Cycling and Giant Group chairperson which includes Giant, Liv, Momentum, and CADEX brands. “Despite this, the community of women in cycling is growing. Today we celebrate their commitment and applaud the enduring spirit they have shown us—we see each of them as a champion.”

Juxtaposing empty public places with cyclists training at home and often in isolation, the viewer sees the hardship and joy of training and riding during these challenging times, as well as the incredible resilience discovered and demonstrated by many during the COVID-19 pandemic. The story lands with a rider winning the first ever UCI ESport World Championship, a historical moment reflective of the new ways professional athletes have continued to push themselves in competition.

Liv Racing Pro enduro rider Rae Morrison is featured training and riding throughout the hero video. Morrison, who is now at the pinnacle of her career, won every stage of Crankworx Rotorua 2020 just before shelter in place began and races were put on hold.

“The focus and connection that cycling brings to my life is what I love—especially now when it has given me a sense of strength and community during such a difficult year,” said Morrison. “I’m continuing to train hard and am eager and ready to race. For now, being able to ride local trails and group rides on Zwift have been a lot of fun.”

For the last year, Liv Cycling has built community and brought women together to train virtually by creating weekly rides on the Zwift platform, and by providing interactive and digital content through LivTV, as well as skills development, maintenance, gear, travel and other guides. Liv also continued its investment in women’s cycling for 2021 as Official Women’s Partner of the Enduro World Series (EWS), and through the expansion of its Liv Racing roster. Now composed of 25 riders, Liv Racing includes the Liv Racing WorldTeam, Liv Factory Racing, and the Liv Racing Collective.

“The goal of the Liv Committed campaign is to highlight our shared connection around bikes,” explained Tu. “This common thread is stronger than any perceived differences and we want to bring that to women around the globe.”

Following the campaign debut, Liv will host a series titled “Stories of Commitment” on its social channels and website featuring stories from Liv athletes and ambassadors. Additionally, Liv will continue its “Ask Me Anything” (AMA) Instagram sessions with Liv Racing athletes and other influential women from within the brand to share riding tips and provide mentorship, as well as perspectives and personal experiences from this past year.

The Liv Committed campaign will be distributed globally throughout 2021 in more than 50 countries, including the U.S., United Kingdom, France, Germany, Australia, Canada, Taiwan, Japan, Korea and The Netherlands. It will run across digital platforms around the world, reaching an estimated 12 million people.