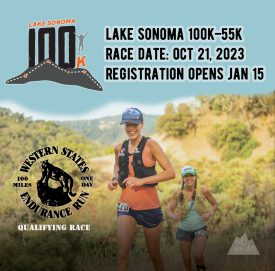 /ENDURANCE SPORTSWIRE/ – Sonoma County’s classic 50-Mile event at Lake Sonoma will be even more exciting in 2023 as the race draws a greater number of elite athletes than ever before. The 2023 North Face Lake Sonoma 50-Mile will serve as the USATF National Team Qualifier for the 80K-long trail event at the World Mountain & Trail Running Championships.  As a result, LS50 expanded the size of the total field, with the additional spots opened in December, 2022.

“There’s so much to be excited about for the Lake Sonoma Race Series in 2023” says LSRS director Skip Brand.  “The addition of the Trail Sisters Women’s Half Marathon will be game changing, and LS50 being selected as USATF’s qualification race for the national team is an amazing honor for our accomplished race director Gina Lucrezi.  It’s great that our community and charity focused trail race will host the country’s best trail and ultra-runners competing for the right to represent America on the world stage.”

The LS50, Marathon and Women’s Half-Marathon director Gina Lucrezi is excited for the future of the iconic 50-mile distance, and the other new events as well: “Being selected as a USATF National Team Qualifier is, of course, a tremendous honor, and we’re really very excited about the potential of the two new races to raise the profile of the LSRS, so we can spend another sixteen years helping the Children of Vineyard Workers Scholarship Fund.”

With a greater focus on the elites in the 50-Miler, plus the Marathon and the Trails Sisters Women-Only Half-Marathon, the April race weekend will be fully loaded. Because of the growth it was time to switch to a fall date of October 21, 2023 for the 100K/55K.

Incoming race director Kevin Deutsche noted: “Thanks to Keira Henninger’s race development it’s possible to have a tough but successful 100-K at Lake Sonoma. I’m also grateful for Gina (Lucrezi)’s work growing the Lake Sonoma 50-Mile into three races, which has been the catalyst for the expansion of the series. Wine country during harvest is simply breathtaking and the late October weekend is the perfect time for runners to enjoy cooler weather during the race. This provides a great late season race in Northern California for runners of all ability levels.”

With this new date in mind, the 2023 Lake Sonoma 100-K will be one of the last chances of the year to qualify for the 2024 Western States Endurance Run.  In addition to a new race weekend, both the 100-K and 55-K courses are brand new.  The out-and-back 100-K boasts over 13,000 ft of vertical gain while the 55-K gains 6,500 ft as runners navigate the single loop course.  Both routes make the most of Lake Sonoma’s gorgeous vistas and robust trail system, with less than two total miles to cover on paved surfaces.

Tropical John Medinger noted: “The relentless Lake Sonoma 50-Mile course has always been a fantastic test for elites looking to understand their fitness, that’s why so many LS50 champs have ended up on the podium at Western States and UTMB.  This new 100-K will definitely be a proving ground for young speedsters and grizzled veterans to test themselves.”

New race directors Kevin Deutsche and Tiffany Belize are already working with former race director Keira Henninger to bring a world-class trail festival to wine country in the fall. Registration for the 100-K and 55-K will open online on January 15, 2023.

Founded in 2008, the iconic Lake Sonoma 50-Miler is known for having one of most competitive fields in the United States according to UltraRunning magazine. The beautiful wine country 50-Miler consists of nearly 90 percent single-track trails weaving through relentless rolling hills, testing runners with three big climbs and traversing more than a dozen creek crossings. Ultrarunners travel to Sonoma from over 20 countries to experience one of the globe’s most popular and distinctive ultrarunning events, one that includes a trail movie festival, gourmet athlete dinner, multiple industry panels and a lively finish line celebration featuring award-winning wine country chefs, multiple breweries and celebrated wine from Wilson Artisan Wineries. Participants as well as their families and friends will enjoy Lake Sonoma and Healdsburg’s small-town charm at an event where a portion of the proceeds support the Children of Vineyard Workers Scholarship Fund that expands educational opportunities for local students.  In 2022, The LSRS expanded to include the 55-K and Marathon, and the 2023 edition will continue to grow, adding on the Women’s Half-Marathon, sponsored by The North Face.

The Lake Sonoma Race Series Board of directors will be guided by a group with tons of trail experience, including former 100-K race director Keira Henninger, LS50 founder and Western States board member Tropical John Medinger, as well as LSRS director Skip Brand from the Healdsburg Running Company.  Rounding out the board will be Coach Tiff Bellize from Healdsburg, CA, Brandelle Macintosh from the Santa Rosa Press Democrat, and Course Director and local legend Jorma Gates.