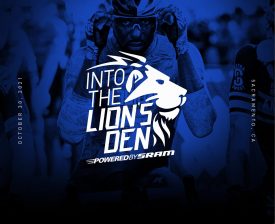 SACRAMENTO (September 16, 2021) – The fastest criterium cyclists in the U.S. will come together in downtown Sacramento to compete for a $100,000 prize purse at the inaugural Into the Lion’s Den powered by SRAM race and cycling festival on Saturday, October 30, 2021. Cycling fans will enjoy an exciting day of racing and family-focused events in California’s state capitol, including a community Halloween ride, bike expo, open criterium, and two professional races featuring some of the country’s top cyclists.

“Sacramento is thrilled to welcome Into the Lion’s Den powered by SRAM athletes to our city,” said Sacramento Mayor Darrell Steinberg. “Our community is passionate about cycling, and our terrain, coupled with our California weather, makes Sacramento an ideal home for this race. We can’t wait to cheer you on later this fall.

Cycling activity on the race course begins with a community ride at 1:00 p.m., open to families and cyclists of all ages and abilities. Participants can casually ride or walk the same 1-kilometer course that will be used for racing later in the day, and costumes are encouraged. A judging panel will be based at the finish line and awarding prizes for creative, spooky, crazy, and fun costumes.

Racing gets underway with the Amateur Open at 2:30 p.m. (register at https://www.bikesignup.com/intothelionsden).  The Pro criterium races will feature women’s and men’s professional teams competing for 70 minutes on the 1 km course around the State Capitol grounds, with the Start/Finish line located on 11th Street and N Street.

The evening’s marquee events start at 3:40 p.m. with the top U.S. pro cycling teams racing for 70 minutes on a 1 km circuit around the State Capitol. A women’s race will be followed by a men’s race with the two fields evenly splitting a $100,000 prize purse, the largest criterium purse in U.S. history. Part of the purse includes $20,000 cash in primes to keep the racing competitive and exciting throughout the circuits. Pro teams and rider rosters will be announced in early October.

“SRAM is excited to be the presenting partner of the inaugural Into the Lion’s Den powered by SRAM event and to reward these great racers with the largest prize purse in U.S. crit racing history. We can’t wait to watch the pro riders come down the home straightaway in front of the Capitol at close to 40 mph,” said Ken Lousberg, SRAM CEO. “Thank you to Mayor Steinberg, the city agencies, Visit Sacramento, Justin and Cory Williams, and the Sacramento cycling community for coming together to create this great event.”

Justin Williams, an elite cyclist and multiple-time U.S. National Champion, is the founder of the Into the Lion’s Den powered by SRAM event and started the L39ION of Los Angeles cycling program along with his brother, Cory. Both the event and team were created to advance the sport of cycling, eliminate boundaries to participation, and promote diversity and inclusion in the sport. L39ION of Los Angeles will be competing in both the women’s and men’s pro races.

“My vision has always been to make the sport of cycling great for everyone,” said Williams, rider-manager of the L39ION. “Into the Lion’s Den powered by SRAM will have something for everyone, from fast racing to fun family activities. Ride your bikes, wear costumes and enjoy the community Halloween event. Get hooked on criterium racing during the open races, and then watch current and former National Champions go full-gas in the pro crits.”

A family-friendly bike festival featuring Halloween activities will take place throughout the afternoon and evening on the State Capitol grounds on 9th Street on the Capitol Mall. The race organizers are working in partnership with the Visit Sacramento Sports Commission.

For more information on the event, sponsorship opportunities and to register, visit: intothelionsdencrt.com