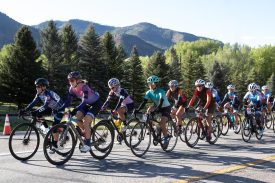 Durango, Colo. /ENDURANCE SPORTSWIRE/ – Registration for the 51st Annual Iron Horse Bicycle Classic will open on Friday, Dec. 16. There will be a local registration party on Thursday, Dec. 15 from 5:00-8:30 p.m. at the Fort Lewis College Center of Southwest Studies in Durango.

The annual celebration of cycling in Durango, Colorado will take place over Memorial Day Weekend, May 26-28, 2023. In addition to the world renowned Durango-Silverton road race and ride, the Iron Horse offers mountain bike and gravel races as well as a festive cycling-centric community atmosphere. Last year, celebrating the 50th anniversary of the event, the Coca Cola Road Race and McDonald’s Citizen Tour events sold out. Interested riders are encouraged to register early.

“We’re excited to build on last year’s 50th anniversary momentum to put on another incredible cycling weekend in Durango. The Iron Horse is a world-class bike weekend that cyclists in Colorado and beyond won’t want to miss,” said Ian Burnett, IHBC Race Director.

The backbone of the Iron Horse Bicycle Classic is the Durango-Silverton route, where riders “race the train” over two mountain passes for a total of 50 miles and 5,700’ of elevation gain. The tradition began in 1971 when Tom Mayer, a cyclist, challenged his brother Jim, a railroad worker on the Durango & Silverton Narrow Gauge Railroad, to see who could get to Silverton faster. Tom was able to pedal the distance faster than the steam engine, and the legend of the Iron Horse was born.

Back in Durango, off-road riders will be challenged by the Subaru Mountain Bike Race and the La Strada La Plata Gravel Ride, both starting at Durango Mesa Park. The Mountain Bike Specialists King & Queen of the Mountain is an omnium competition featuring the professional road race and mountain bike races.

The Iron Horse Bicycle Classic celebrates all that the Durango cycling community has become over the past five decades–a home and training ground for Olympians, national, and world champion cyclists as well as the 600-rider strong Durango Devo youth development program. With over 300 miles of trails and diverse terrain within city limits, Durango has become a premiere destination for traveling cyclists and a limitless pedaling playground for the locals

This year, there will be a festival atmosphere at Durango Mesa Park on Sunday for the mountain bike and gravel races with music, food & drink, plenty of spectating options, and fun for the whole family. The top gravel finishers will race to the line around the same time as the elite mountain bike races start. The mountain bike course will feature new trails being built in the area this spring as a part of the bike park being planned at the 1,850-acre property just East of downtown Durango.

*Return transportation from Silverton will be offered to participants

The Iron Horse Bicycle Classic is a 3-day cycling festival, which includes a 47-mile bike race and tour over two 10,000’ passes from Durango to Silverton, Colorado. The tradition began in 1971 when Tom Mayer challenged his brother Jim to see if he could ride the route faster than the train. Today the Iron Horse includes mountain bike and gravel events as well as numerous other cycling festivities around town.