Great Runs Rates the Best and Worst Airports for Runners

Plus Our List of 25 Best Runs Near an Airport, Worldwide

BOSTON, Mass. October 4, 2022 /ENDURANCE SPORTSWIRE/ – Great Runs, the ultimate guide to the best places to run in destinations worldwide, has named the best and worst airports for runners. Runners who travel for business or pleasure will, at some point, end up at a hotel near an airport. Perhaps it’s because that’s where the meeting or conference is scheduled, or they got stuck there due to a flight cancellation. Some runners even choose certain airport hotels so they can sneak in a run before hopping on a flight.

In that spirit, Great Runs has researched the Best and Worst Airports for Runners, as well as the 25 Best Runs Near an Airport. Good airports for running have an interesting or scenic running route within some proximity, and a choice of decent accommodations nearby. The ‘worst’ airports don’t have good outdoor running options — the best option at these airports is probably the hotel treadmill!

Great Runs has also named the 25 Best Runs Near an Airport,. These routes are running destinations in and of themselves!

Great Runs is the ultimate guide to the best places to run in destinations worldwide. Tens of thousands of curated routes, all researched by a global team of editors. 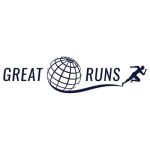 View all Releases by Mark Lowenstein