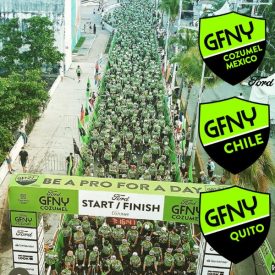 The 9th GFNY Cozumel offered the 2200 riders the now classic, stunning and lightning fast 157km course, making it the longest bike race in the Americas south of NYC.

In the female race, 2019 and 2020 GFNY Cozumel champ Ana María Hernandez won in 3:50:27, followed by Montserrat Camargo who made her sixth GFNY podium and is still waiting for her first win. María Guadalupe Ríos Perez completed the all Mexican podium.

Ecuador’s capital received 900 racers for the inaugural GFNY Quito on a course touching 3000m above sea level and ending with the relentlessly steep and cobble stoned climb through the historic Guapolo neighborhood.

Yet, it took a head to head sprint to decide the male race: local athlete Andres Padilla (RideClub) took the overall win in 3:22:46, followed by José Cornejo in 3:22:59 who was already second earlier this year at GFNY Ecuador Manta. Meanwhile Francisco de la Torre (Bet endurance Team) stepped up on the podium from his 4th place in Manta.

Viña Veramonte, located just outside the capital city of Santiago de Chile, hosted 700 racers at the 4th edition of GFNY Chile. The racecourse of 127.9km with an elevation gain of 1832m included the infamous 27% steep climb of Muro de Tunquen.

Francisco Kotsakis (Team Papa Johns) took the win in 3:24:01 against Adrian Alvarado (Team Velo’Z) who was third at the GFNY World Championship in NYC earlier this year and second at GFNY Chile already last year. Benjamin De Vicente (Cyclingwolf) rounded out the all Chilean podium.

30 plus events around the world. View the latest calendar here