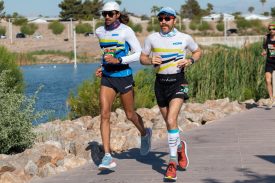 Live streaming race-day coverage begins Friday, February 18 at 7:30 AM (PST) and will run continuously for 15-hours, or until the top 3 men and women finish the race. Several of the top names in ultra-running will make special guest appearances throughout the live broadcast. Guests include: Zach Bitter, Connie Gardner, Nick Coury, Traci Falbo, Joe Fejes, Micah Morgan and Jon Olsen. Stephanie Rubeli, co-founder of Beyond Limits Running and co-Race Director of Jackpot stated, “We are beyond honored and humbled to have the best-of-the-best ultra-runners in the country competing in this year’s Jackpot Ultra USATF Championship race and helping provide unique and entertaining coverage throughout the broadcast. With our friends at Steep Life Media capturing all the action live, viewers from around the world will get a chance to watch a top-tier ultra-running championship race from start to finish.”

Ken Rubeli, co-founder of Beyond Limits Running and co-Race Director of Jackpot stated, “We would like to thank Jackpot Ultra Running Festival’s Presenting Sponsor, City of Henderson, for allowing us to host Jackpot for the 9th time at Cornerstone Park. Additionally, we’d like to thank COROS, goodr and SaltStick for helping provide live streaming coverage of the Championship race.”

About Beyond Limits Running:

Co-founded 10 years ago by a double organ transplant recipient and her husband, Beyond Limits Running was formed to help all runners of all abilities run way past their perceived limits by competing in running events. Known for its over-the-top festive events, Beyond Limits Running produces the Jackpot Ultra Running Festival, the Beyond Limits Ultra Race, and the Happy Hippie Harvest Run.  Learn more at www.BeyondLimitsRunning.com