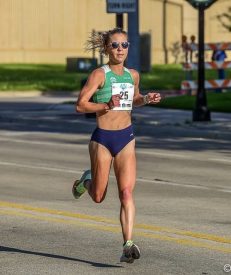 “It will be an honor to work with Molly and to assist her in growing out her professional career,” Mengel said. “Molly has shown the grit, determination, and talent that my agency covets in an athlete.”

When asked about her new partnership with Elite Runner Management, Bookmyer said that “to be successful in any career, you need to be surrounded by people who believe in you and are experts at what they do. I have a lot of goals that I want to accomplish with running and believe that Chris can help me achieve them.”

In her brief professional running career, Bookmyer has progressed quickly. Under the tutelage of her coach for the last two years, James McKirdy of McKirdy Trained, she has garnered impressive results at multiple distances. This year alone she has posted top ten finishes in the Chevron Houston Marathon (9th), CU Cherry Blossom 10 Miler in Washington, DC (6th), the USATF 25K Championships in Grand Rapids, MI (6th), and Grandma’s Marathon in Duluth, MN, where she placed 7th in a marathon personal best of 2:32:53.

Bookmyer has achieved success off the course as well. Recently, she was named the winner of the 2022 Lashutka Spirit Award by the Nationwide Children’s Hospital Columbus Marathon. The award, named after the former mayor of Columbus, Ohio, Bookmyer’s hometown, honors persons who by their spirit and strength inspire others to overcome obstacles and challenges in life. Bookmyer, the champion of last year’s Columbus Half Marathon in a time of 1:12:28, will defend her title in October. “As a survivor of two brain surgeries, Molly has overcome the greatest of obstacles to compete successfully at the highest level. We look forward to collaborating with Molly and her team to assist in her development both as an athlete and as a person,” Mengel said.

In addition to the Columbus Half, Bookmyer plans to take advantage of the best U.S. races for the remainder of 2022 leading into 2023 with the eventual target of hitting the world standards in the 10,000m (31:25) and marathon (2:29:30). “The goal is to gain more racing experience, compete for top places, and work towards making a World Team. My Fall season will kick off at the Falmouth Road Race on August 21 and end at the California International Marathon in Sacramento in December,” said Bookmyer.

While working on her nutrition, strength training, and hitting workouts, “Molly is doing everything she can to compete at a world class level” said McKirdy. “Her vision of success transcends what she has previously accomplished. Although she doesn’t have a lifetime of competitive experience like some other athletes in this sport, when the gun goes off Molly doesn’t care who you are, she will give her best and not be intimidated. The ability to have that confidence is remarkable and bodes well for her future success.”