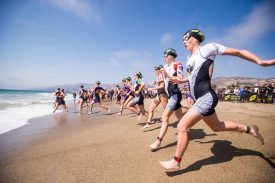 /ENDURANCE SPORTSWIRE/ – Super League Triathlon (SLT) has agreed a deal with DAZN, the leading global sports streaming platform, to broadcast all events live across its global platform until the end of 2023.

The non-exclusive deal will see events broadcast live in 200+ countries and territories except the USA, and will also see DAZN stream SLT shoulder content, including the documentary series Every Second Counts.

Super League Triathlon pitches the best athletes in the world against each other in thrilling made-for-broadcast race formats at iconic locations.

Super League Triathlon CEO, Michael D’hulst, said: “As we head closer to our biggest ever Championship Series we are delighted to be partnering with DAZN to grow our audiences around the world. Super League is committed to turning triathlon into a true spectator sport and we can now offer more people than ever before access to our racing and compelling content offering.”

Tom Burrows, DAZN’s EVP Global Rights Strategy said: “As the global leader in sports entertainment streaming, we are committed to providing more fans with a wider range of accessible and exciting sports content. Bringing Super League Triathlon to our platform underscores this commitment and we can’t wait to broadcast the races and wider content to its passionate audiences.”

Nautilus Board Considers Sale of Company, Other Strategic Alternatives