Cows, fording a stream, and mud all part of 2022 adventure challenge 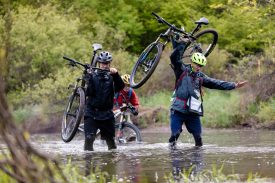 MAINE, WI /ENDURANCE SPORTSWIRE/ – For the seventh year running, the Rib Mountain Adventure Challenge adventure race had racers trekking, paddling, biking (including through a cow barn), and fording rivers this past Memorial Day weekend. The race drew both new and experienced racers alike from 14 states, and also Japan, to compete in either the 3-hour, 8-hour, or 18-hour event.  Teams of up to four people needed to work together to locate checkpoints hidden in the woods using only a map and compass to navigate.  Fifty-eight percent of racers were competing in their first or second race ever. Ultimately, the 18-hour race was won by Team Toyota Tundra, who is comprised of adventure racing national champions.

“This was one of the hardest things I have ever done, but one of the best,” said Dang Yang.  “As a first time adventure racer, this event left me with new memories to share, new friends to reach out to, and a new community of adventurers to be part of.”

Every year, the racecourse is completely new, including a new location that is kept secret until the days leading up to the race. Racers knew the course would be within 30 miles of Wausau this year, but only found out the exact location of the race start the week before the race.  They did not find out what the actual racecourse would be until they arrived at headquarters the day of the race and were given maps and instructions with the locations and disciplines they would need to do to finish the race. The event sold out for the second year in a row, capped at 500 racers, again making it the largest adventure race in the United States.

Race directors began planning this particular course in 2019; however, COVID-19 put their plans on hold.  Five private property owners including Mathy Construction and Wilke’s Dairy Farm opened their land and trails to racers.  At Wilke’s Dairy Farm, racers looked for check points along their “haunted tractor-ride” trails, completed a dairy-themed special challenge, and even biked through a barn surrounded by curious cow spectators.

The 18 hour racers were bussed 40 miles north of headquarters on Friday night to start their race near midnight in the Underdown Recreation Area. They spent most of the night trekking through swamps, bogs, and lakes until they reached the bicycles that they had previously staged prior to the race start. After completing a loop on the Prairie Dells singletrack mountain bike trails maintained by Central Wisconsin Offroad Cycling Coalition (CWOCC), they rode a mix of gravel and paved roads to navigate to a paddle on the Wisconsin River.  Due to high river levels, the race directors needed to modify the course to ensure racer safety.

On Saturday morning, the 8 hour racers were bussed to the Wisconsin River Forest Unit where they paddled the Wisconsin River, then rode the mountain bike flow trail at Sylvan Hill, and finally completed treks on several private properties.  Between rain showers, the 3 hour racers departed from historic Brokaw in all directions. With 230 racers on the race course, race directors dissipated the crowd quickly with a “choose you own adventure” race course style.  With this format, racers could complete the course in any order.  Some teams chose paddling first, while other racers darted to their bikes to begin other sections that played more to their team’s strengths.

“It’s very impressive to see how well organized the race directors handle all of the logistics necessary to pull off three courses and 500 racers,” said Anthony Leiton.  Leiton has been adventure racing for over two decades and serves as a race director for Chasin’ the Bone Adventure Race.  “Creating a course for a variety of abilities that provides a challenge while having fun is a delicate balance.”

Racers returned to the finish line exhausted, muddy, and bursting with excitement from completing such an incredible adventure.  Although Leiton competed in every Rib Mountain Adventure Challenge event since its start in 2015, this year was especially special since his daughters partook in their first-ever adventure race along with he and his wife.  “We are so lucky to have Rib Mountain Adventure Challenge here in Central Wisconsin giving families and friends an opportunity to team up and compete in an event!” said Leiton.

Over 50 volunteers worked together to put on the event, including Meagan Cihlar who has volunteered every year since its inception.  “From somebody who isn’t really a fan of sports, I find this event amazing in how everyone involved is genuinely kind and welcoming and encouraging,” said Cihlar, who was one of the first volunteers to arrive, and also one of the last to leave. “This race is a part of Central Wisconsin–it belongs here–and I’m proud to be a part of that.”