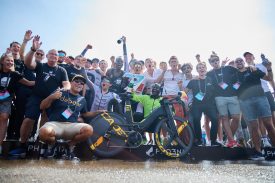 /ENDURANCE SPORTSWIRE/ – CADEX, a leading brand of high-performance cycling products, is set to release “Impossibly Fast: Kristian Blummenfelt’s Pursuit of Sub7,” a new film that documents the Norwegian’s journey to becoming the first athlete to complete the full Ironman triathlon distance in less than 7 hours.

“The world sees Kristian as this larger-than-life super athlete, winning everything from Olympic gold to Ironman World Championships and smashing the Sub7 barrier, all in less than a year,” said CADEX Global Marketing Director An Le. “With this film, we wanted to show the human side of Kristian, capturing the moments away from the limelight. The long training days, mental and physical uncertainties, relentless preparation, and total teamwork.”

The Pho3nix Sub7/Sub8 Project was an ambitious endeavor to push the limits of human endurance. Blummenfelt was one of four athletes (two men, two women) chosen for this bold attempt to “achieve the impossible” and go faster than any other Ironman triathletes in the history of the sport. The unique event threw out the usual no-drafting rules of Ironman races and allowed each athlete a team of pacers for the swim, bike and run legs. In the end, Blummenfelt beat Joe Skipper, his head-to-head competitor, and smashed the 7-hour mark with a time of 6:44:25.

Blummenfelt and his team of eight pacers each rode the new CADEX Tri frameset and CADEX Aero WheelSystems, cutting-edge race gear that helped the Norwegian accomplish his goal. He completed the 180km distance with a time of 3:24:22 for an average speed of 52.8 kph, shattering his target time by nearly 25 minutes.

Directed by James Poole, “Impossibly Fast” follows Blummenfelt and his team of sports scientists and CADEX product developers as they set out to answer the question, “how fast can we really go?”

“I have filmed sporting stars for a number of years but haven’t met anyone quite like Kristian,” Poole said. “The willingness to sacrifice everything in the pursuit of his goals, the steely determination and inner belief is inspirational. Over the four months of filming, I got to see firsthand the commitment and willingness to do everything to achieve a goal, not only from Kristian but also the team around him.”

From high-altitude training camps in Spain to wind-tunnel analysis in the Netherlands and team preparations in France, the film documents the detailed approach every step of the way. The lead-up to Sub7 also included high-stakes races. The first sign that Blummenfelt was on track came in Cozumel, Mexico, where he raced his first-ever full-distance Ironman. Not only did Blummenfelt win the race, he also set a new world record at the time for the fastest Ironman time, 7:21:12.

“This, I think, truly shocked the world,” said Olav Aleksander Bu, the lead sports scientist behind Blummenfelt’s Sub7 attempt. “Because it was so extraordinary compared to the performance that people expected, and he did it in his debut.”

There was little time to celebrate the St. George win, as Blummenfelt and his team immediately shifted to final preparations for the Sub7 attempt. His strategy going into race day was to aim for a fast but steady pace on the bike and conserve enough energy to go all out on the run. With the help of his pacers, riding with power and precision on their CADEX bikes and gear, that’s exactly what they did. His competitor Joe Skipper had the lead going into the run, but Blummenfelt quickly reeled him in and went on to win and achieve his goal.

“What a day,” Blummenfelt said after setting the record. “What a team. I’m proud of what the whole team has done, more than just what I have done. How do you achieve the impossible? This is how.”

CADEX Tri Frameset: Blummenfelt’s record-breaking Sub7 effort coincided with the development of the cutting-edge CADEX Tri frameset that helped him achieve his goal.

Training Camp: Last winter, Blummenfelt kicked off his Sub7 preparations with an extended training camp at Sierra Nevada, Spain, where he trained at altitude and put in long days on the road.

CADEX Tri wind tunnel: Blummenfelt worked with a team of CADEX product developers and aerodynamicists to create a radical new bike that opened up new opportunities for speed.

CADEX Tri prototype: Blummenfelt put an early prototype version of the CADEX Tri frameset and Aero WheelSystem to the test in France.

Sub7 Prep: A team of pacers worked with Blummenfelt to perfect their plan for the 180km bike leg. The hard work paid off as the Norwegian beat his goal for the bike leg by nearly 25 minutes, putting him in position to break the 7-hour barrier.

Sub7 Bike: On race day, Blummenfelt and his pacers executed their plan to perfection, each pushing their CADEX Tri framesets and Aero WheelSystems to the limit on the Dekra Lausitzring motor circuit near Dresden, Germany.

CADEX is a line of high-performance cycling components, including WheelSystems, tires, saddles, handlebars and other components. CADEX products are ridden and raced by world-class athletes who participate in developing and refining new products and technologies. CADEX components are available individually and as part of an exclusive line of top-flight bicycles. Learn more at www.cadex-cycling.com.