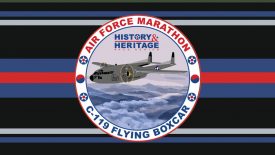 WRIGHT-PATTERSON AIR FORCE BASE, Ohio – The C-119 Flying Boxcar will be the sixth and final historical aircraft featured in the inaugural History & Heritage Race Series, powered by the Air Force Marathon, beginning November 1.

The History & Heritage Race Series will hold six virtual races throughout the year. Each race will feature its own historical aircraft vital to the U.S. Air Force’s past.

“The C-119 Flying Boxcar was an instrumental aircraft in saving the lives of 80,000+ U.S. soldiers and civilians during the Korean War,” said race director Brandon Hough. “It is a story many do not know and is often not told, thus we are proud to share that story and many others about the C-119 as part of its feature in our History and Heritage Race Series.”

The Flying Boxcar was developed in the middle of WWII but was used in the Korean War and Southeast Asia Conflict. Nearly 1,200 Boxcars were built with the majority seeing heavy use in Asia as a troop and equipment transport aircraft.

Each History & Heritage Race Series participant will receive a patch of the featured aircraft for that particular race, an aircraft information card, a finisher’s medal and a downloadable finisher’s certificate.

Participants will have the option to choose between the marathon, half marathon, 10K, and 5K.

To upload results, obtain a GPS-tracking app that confirms time and mileage.

The 2022 History & Heritage Race Series will kick off on December 1st, 2021 which is when the first aircraft of the next year’s virtual series will be revealed.