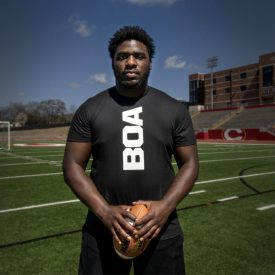 RALEIGH, N.C. (April 12, 2022) /ENDURANCE SPORTSWIRE/ – BOA Nutrition, continues to ride a wave of momentum by adding Ron Courson, Director of Sports Medicine at the University of Georgia, to the company’s medical advisory board. Courson teamed up with BOA earlier this year following a pilot program with the Georgia football team, utilizing its oral aerosol sodium replenishment product, Endure, for rapid hydration and to help players prone to cramping.

BOA also recently announced it has signed an endorsement deal with Georgia’s first-team All-SEC defensive tackle Devonte Wyatt. Wyatt was one of the players selected by Courson to use Endure over the course of the Bulldogs’ final games of the season, including the College Football Playoff semifinal versus Michigan in the Orange Bowl and the national championship victory over Alabama.

BOA Nutrition launched in 2020, developing sports performance products in collaboration with athletic training and nutrition experts at Duke University. Endure is the first ingestible aerosol that delivers sodium and other essential nutrients which are absorbed quickly. Using the company’s innovative OraBlast technology, Endure was formulated to help protect athletes against the “sodium gap” where fluids can no longer effectively hydrate cells, leading to muscle fatigue, cramping, and other hydration related issues.

“In sports medicine, knowledge is power,” said Courson, who is in his 27th year with Georgia Athletics. “We try to research and use evidence-based products – BOA’s ability to deliver electrolytes and sodium quickly and safely had been proven with endurance athletes, and it has worked for us.”

For the trial program, Courson and his sports medicine team selected players who had histories of heavy sweating and cramping, a condition exacerbated in late season games when players go from cold weather outdoors to warmer conditions inside domed stadiums. The strategy was to use BOA Endure to preload athletes with sodium and hydrating nutrients prior to the games and equip athletic trainers with pocket-sized cans of Endure on the sidelines. “It helps that the product tastes good,” Courson added.

Courson is recognized as one of the nation’s preeminent sports trainers. A former track and field athlete, he served as athletic trainer with the U.S. Olympic Team at the Summer Games in 1988, 1992 and 1996 when he was chief athletic trainer for U.S. Olympic Track and Field. He has had leading roles with the NCAA, Southeastern Conference, National Athletic Trainers’ Association (NATA) and the American Football Coaches Association, and currently serves on the NFL Health and Safety Committee. He is an inductee of the Southeast Athletic Trainers Hall of Fame and NATA Hall of Fame.

“We are honored to have Ron’s endorsement and his invaluable contributions as a member of our medical advisory board,” said Jon Pritchett, CEO of BOA Nutrition.

The 6’3”, 304-lb. Wyatt, who had a standout NFL Combine, is currently preparing for the 2022 NFL Draft in Las Vegas, April 28-30. “I’m happy to be working with the BOA team to spread the word about a really fast and effective hydration product,” said Wyatt. “It feels good to know you are protected from cramps when you’re competing at a high level.”

BOA Nutrition, Inc. is a sports nutrition and wellness company based in North Carolina. They develop unique products with novel ways to rapidly deliver essential nutrients so athletes of all ages and skill levels can optimize their performance. BOA’s objective is to provide athletes with fast-acting, concentrated, great-tasting and convenient products to use no matter where, when, or what the sport. The company’s technology, and many other innovations from BOA, are protected by 18 provisional patents and other proprietary trade secrets. Follow BOA Nutrition, Inc. on Facebook, Instagram, LinkedIn and Twitter.