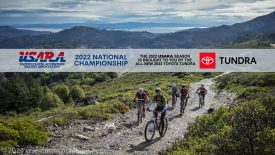 Bishop, California has been named the host of the 2022 U.S. Adventure Racing Association (USARA) National Championship.

July 29, 2022 /ENDURANCE SPORTSWIRE/ – Now in its 23rd year, the USARA National Championship is the premier amateur adventure racing event in the United States. Registration is now open for teams of three at https://www.usara.com/usara-nationals.html.

Taking place September 16 and 17, 2022, the race will crown the U.S. national champion, as determined by the team that collects the most checkpoints along an unmarked course by trekking, biking, and paddling under the 30-hour cutoff. Teams are not informed of the details of the course in advance of the race and must navigate from checkpoint to checkpoint using only a map and compass.

This year marks the first return of the USARA National Championship to California since 2006. San Luis Obispo, California-based All Out Events, the producer of the Mammoth-Bishop 36-Hour Adventure Race and the Mammoth Checkpoint Challenge 6-Hour Adventure Race, has been named the host of this year’s championship, and race director Yishai Horowitz has promised racers an unforgettable experience in some of California’s most epic terrain, with racers traveling from desert to alpine environments.

“I want to give people an incredible tour of the most interesting and different terrain,” Horowitz said. “It’s going to be a really, really cool experience – a race with a journey feel.”

The race will start at 8 a.m. on Friday, September 16 and last until 2 p.m. on Saturday, September 17. Racers will be greeted with cold beverages and tasty food after they cross the line and the award ceremony will take place at 4 p.m. More information about the race, including details on lodging and transportation, can be found at https://www.usara.com/usara-nationals.html.

“We are excited to bring the USARA National Championship back to the West Coast and to take advantage of the fantastic terrain it offers,” USARA Executive Director Mike Garrison said. “Whether you’re aiming to win or just to finish, if you consider yourself an adventure racer, this is a race you won’t want to miss.”

Real-time satellite tracking of the teams participating in the event, provided by Adventure Enablers, will allow fans to follow the race live at USARA.com, where comprehensive live coverage and photos will be posted as teams from around the country battle to win the title of 2022 USARA Adventure Racing National Champions.

The race will be the culmination of USARA’s yearlong partnership with GearJunkie, which is serving as USARA’s Official Media Partner through the 2022 season, as well as the all-new 2022 Toyota Tundra, which serves as title sponsor of the 2022 USARA season.

Now a 501(c)3 non-profit organization, the United States Adventure Racing Association has been the primary national governing body for the sport of adventure racing since its inception in 1998. USARA supports race organizers and promoters in developing safe, challenging, and fun events for adventurers at all levels of the sport. Since its founding, USARA has helped to organize more than 2,500 national events across the U.S.A. The production of the USARA Adventure Race National Championship – run annually since 1999 – and the USARA national ranking system have aimed to provide a venue for determining the top teams in the country.