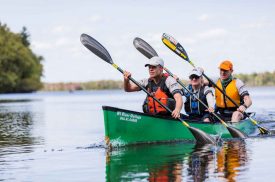 Partnership with U.S. Adventure Racing Association to be sponsored by Toyota Tundra

April 5, 2022 | DENVER, COLO. /ENDURANCE SPORTSWIRE/ – To elevate the growing sport of adventure racing, GearJunkie and the U.S. Adventure Racing Association (USARA) have announced a partnership. For the 2022 season, GearJunkie will serve as Official Media Partner and cover races via reporters on the ground and teams formed to participate in 10+ competitive events across the country.

The partnership is a part of a campaign with the all-new 2022 Toyota Tundra, which serves as title sponsor of the 2022 USARA season. Content on a newly-launched GearJunkie channel covering adventure racing will be brought to you by Toyota Tundra.

“Adventure racing is an apex outdoor sport that requires teamwork, strategy, and wilderness skills,” said Stephen Regenold, founder of GearJunkie. “We are thrilled to be working with USARA this year on a project that will highlight the people, places, and dramatic settings that make this sport one of a kind.”

USARA has been the national organizing body of U.S. adventure racing since 1998. It provides safety standards, offers insurance for race directors, and aggregates rankings as teams compete and accumulate points at events throughout the season.

More than 100 adventure races are scheduled for 2022. Thousands of racers will compete on courses that require mountain biking, paddling, trail running, and navigation to checkpoints via map and compass techniques.

Races run from about 4 hours in length to 24 hours or more, depending on difficulty. The season culminates at the USARA National Championship race on September 16-17 in the Sierra Nevada mountains of California.

“We could not be more excited for this partnership,” USARA Executive Director Michael Garrison said. “The GearJunkie project and the all-new 2022 Toyota Tundra sponsorship will allow us to reach a massive audience while providing additional budget to support our efforts to grow the sport.”

Garrison noted the sponsorship will enable the non-profit to advance initiatives like the Women in AR campaign; individual mentoring for race directors; and the support of a new Regional Championship circuit of events.

GearJunkie will launch its adventure racing content channel in May. Watch for event coverage, team profiles, adventure 101 articles, and more at gearjunkie.com.

About GearJunkie: Founded in 2006, GearJunkie is the top source for outdoors news, trends, and gear reviews. The site has offices in Denver and Minneapolis. GearJunkie is a publication owned and operated by Lola Digital Media, which is based in Los Angeles and runs a portfolio of digital publications and media brands.

About USARA: As the governing body of adventure racing in the United States, USARA’s mission is to ensure the enduring success of the sport by strengthening and supporting the existing community of racers, directors, and enthusiasts; creating pathways for new adventurers to enter the sport; and engaging with the greater outdoor community in the US to highlight what an amazing sport it is. More information at www.USARA.com.

View all Releases by Ryan Johnson