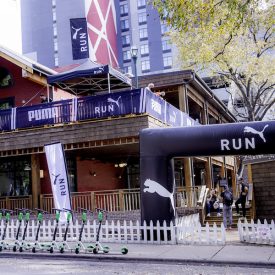 /ENDURANCE SPORTSWIRE/ – Believe in the Run, a media company centered on run and run culture, recently partnered with PUMA on a dual activation for the debut of PUMA’s newest racing shoe, the Fast-R Nitro Elite. The activation consisted of a shakeout run and live lunch podcast and took place during the week of The Running Event 2021 in Austin, Texas. Promotion leading up to and during the events drew over 1.5 million impressions on social media, while the actual events drew over 200 runners and attendees.

“While we always have a good time at The Running Event, the partnership with PUMA took the week to a whole new level,” said Thomas Neuberger, Founder of Believe in the Run. “To see the Believe in the Run community come out and support the debut of the Fast-R Nitro Elite while running the streets and trails of Austin made it a day to remember.”

In cooperation with leading sports marketing firm TRACS, Believe in the Run organized and executed a morning shakeout run along the Lady Bird Lake Trail in Austin with PUMA elites Amy Cragg, Taylor Werner, and Jonathan Dressel. Attendees lined up over an hour before the event to receive free pairs of PUMA Deviate Nitro shoes and running gear. Post-run refreshments included coffee and local Voodoo doughnuts with the Nitro SP colorway. Participants were also able to take photos in front of a PUMA and Believe in the Run branded step and repeat. Promotion of the event was also aided by YouTuber Michael Ko (a.k.a. Kofuzi).

At noon, a live lunch podcast was held on the outdoor deck of Banger’s Austin, and featured free food and drink for attendees, as well as PUMA gear giveaways. During the live lunch, Believe in the Run interviewed the aforementioned PUMA elites as well as senior product line manager Todd Falker. The conversation revolved around the athletes’ careers as well as the development and design of the PUMA Fast-R Nitro Elite, the newest evolution of PUMA’s racing segment, featuring a decoupled heel and carbon-plated bridge. The shoe is set to debut in February 2022.

“The RUN PUMA relaunch started with our R&D team listening to runners, so it was great to connect with the community in person for a group run and live podcast,” said senior product line manager, Todd Falker. “But Puma being the ‘forever faster’ brand, we had to build the fastest race-day shoe we could, and were so excited to debut Fast-R Nitro Elite to the world with Believe in the Run at the Running Event! Advanced concepts take time to get just right, but Fast-R delivers a unique experience that is the embodiment of our ‘big cat energy’ spirit.”

“By all accounts, the day was an overwhelming success,” said Neuberger. “We put all our energy into making sure runners were able to come out and have a great time while experiencing a high-level of brand engagement, and we feel we succeeded on all fronts. We love connecting runners with brands they love and can’t wait to elevate that experience even more going forward.”

About Believe in the Run

Believe in the Run is an independent run culture outlet based in Baltimore, Md. Founded in 2009, its goal has always been to provide honest shoe and gear reviews with a culturally-relevant and entertaining edge. Its mission is to bring a fresh look to running and provide their followers with sound advice from everyday runners just like them. https://www.believeintherun.com/

PUMA is one of the world’s leading Sports Brands, designing, developing, selling and marketing footwear, apparel and accessories. For more than 70 years, PUMA has relentlessly pushed sport and culture forward by creating fast products for the world’s fastest athletes. PUMA offers performance and sport-inspired lifestyle products in categories such as Football, Running and Training, Basketball, Golf, and Motorsports. It collaborates with renowned designers and brands to bring sport influences into street culture and fashion. The PUMA Group owns the brands PUMA, Cobra Golf and stichd. The company distributes its products in more than 120 countries, employs more than 14,000 people worldwide, and is headquartered in Herzogenaurach/Germany. https://about.puma.com/

Believe in the Run