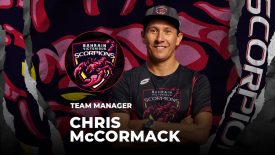 McCormack will be up against a familiar roster of Team Managers this year following the successful debut of SLT teams in 2021, but faces a new raft of tactical decisions to make, and the unknown quantity of the Fan Team.

Bahrain Victorious Team Manager, Chris McCormack, said: “MANA Group who represent Bahrain Victorious, the only triathlon team in the world who have existed for eight years, are excited to race in the Team competition in Super League. After sitting on the sidelines last year with most of our team members racing in the Scorpions we have opted to come in and take a franchise and look to win the Series this year.

“Bahrain Victorious is a team that exists in triathlon and not just Super League and it made sense to us that when a world’s first Team series competition came about we would take up a license and compete. We will look to win the Teams Championship and the men’s and women’s Overall Leaderboards which Georgia Taylor-Brown did last year and Vincent Luis has in the past. I am super excited about it and looking forward to leading the charge and chasing glory.”

Bahrain Victorious is an innovative concept unparalleled in endurance racing and the vision of His Highness Sheikh Nasser bin Hamad al Khalifa, chairman of the Supreme Council for Youth and Sports and president of the Bahrain Olympic committee. With an all-star stable of athletes including Olympic medalists, world champions, and future stars, the Bahrain Victorious Team race for key triathlon titles and promote a culture of health and wellness and endurance sporting excellence across the Gulf region and beyond.

The first decision facing the Team Managers and the Fan Team owners as part of Super League’s trailblazing initiative is who to retain. A new feature for 2022, Team Managers have the option to retain one male and one female athlete from last year’s team. If they choose not to retain then they get a First Pick option before the main draft.

There is also an added tactical element to the main draft with Super League confirming that this year athletes can win a Short Chute on behalf of their team, meaning fast swimmers could contribute a shortcut to overall leaderboard contenders while also earning discipline leaderboard points for themselves and their team.

The new rules add an existing extra tactical element to team selections, and heap further pressure on the managers to perform.

The expansion of SLT Teams has opened up the possibility to become a Team Owner, which has been seized by Bahrain Victorious.