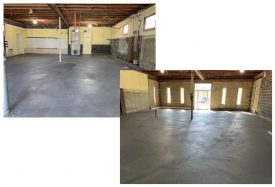 /ENDURANCE SPORTSWIRE/ – Ashworth Awards is in the process of constructing their second manufacturing facility for their fully made in USA domestic medallions and awards line. In February of 2020, Ashworth Awards launched its new line of MADE IN USA medals and awards and it quickly became apparent that an expansion was necessary to accommodate the influx of new business. The company has been renovating their  second location to reduce it from office space to an open manufacturing space. The second facility will allow for faster production times and will allow enough equipment and space for R&D so Ashworth Awards can create and develop additional products for their clients.

“The second location just had its concrete floors poured and we could not be more excited,” stated Daniel Ashworth.  The co-owners , Daniel Ashworth & Kimberly Ashworth, are spearheading the expansion project, and have been working hard to improve the efficiency of the  line since its launch.  Both facilities are located in North Attleboro, MA where the business was started by Daniel’s father Doug in 1965, and exponentially expanded by Daniel and his wife, Kimberly Ashworth.

If you are in the market for MADE IN USA medallions and awards that are  cost competitive to imported medals from China, made from recycled materials, decrease your carbon footprint and require a much less lead time to manufacture and deliver please click the link below.

View all Releases by Ashworth Awards