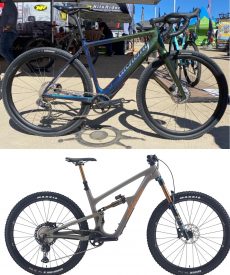 Denver, Colorado (February 24, 2022) /ENDURANCE SPORTSWIRE/ – Alchemy Bikes, a leading boutique bike manufacturer with a direct-from-fabricator-to-rider (DFFR) business model, has reported the theft of two of its high-end, hand-built bikes from its Denver showroom. Alchemy has reported the theft and bike serial numbers to local police and is spreading the news about it with the hopes of finding the bikes and discouraging additional bike thefts in the future.

The two stolen bikes are as follows: a sand-colored Arktos 135 XT mountain bike with Shimano XT components and FOX Factory suspension, valued at $6999; an eRonin gravel e-bike featuring a Praxis and Shimano drivetrain and carbon wheels, plus a Harlequin custom paint job with a blue-green design motif, valued at $13,500. The one-of-a-kind eRonin bike (pictured) was not charged and there wasn’t a charger nearby for the thieves, but the bike is still rideable without a charged battery.

“It’s always so unfortunate when bikes are stolen, no matter if it’s a bike that belongs to a consumer who spent hard-earned money or a brand who has taken so much time to thoughtfully manufacture it,” says Jason Armknecht, general manager for Alchemy Bikes. “We’re hoping that by putting the news out about this theft, it might be able to attract attention to these two uniquely styled bikes – please contact us or the police if you have any information at all.”

Based on security camera footage, it appeared that two young white males were seen walking through the parking lot adjacent to the Alchemy showroom at about 5 a.m. on Feb. 18. They saw the bikes through the windows and began talking about stealing them; they then pried open the door and took the bikes. The security camera captured the break-in and the ensuing getaway with the two perpetrators riding away on the bikes. Police responded in minutes, but the perpetrators were already gone from the area.

Anyone who has information about this incident or has seen what might be the missing Alchemy bikes in question is asked to contact Denver Police at (720) 913-2000.