A virtual race for everyone with the Czech pros: Try the segment from L’Etape Czech Republic by Tour de France 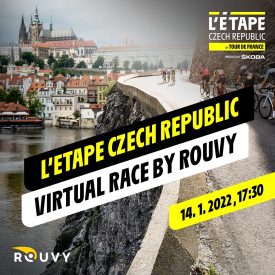 Prague, Czech Republic / The winter months are not suited to cycling lovers by default, but modern technology changes the established order in this area as well. On Friday, January 14, the shopping center Galerie Harfa in Prague will hold a virtual cycling race on a real segment of L’Etape Czech Republic 2022 on the ROUVY platform.

Prague, Czech Republic / January 12th, 2022 /ENDURANCE SPORTSWIRE/ – Those interested will be able to try one of the route segments of the L’Etape Czech Republic by Tour de France, whose second year edition will visit Prague and the Central Bohemian Region on June 11, 2022.

The culmination of the sports day in Harfa will be a race of cycling stars led by Ján Svorada, Jiří Ježek and Petr Benčík, who will introduce themselves to fans on site. Daniel Turek, the winner of last year’s premiere of L’Etape in Czech Republic, will also join the online broadcast.

“The start of the virtual race with the Czech cycling stars is scheduled for 17:30 CET and will be preceded by a joint autograph session. ‘Tomáš Jílek will host the entire program on the spot, with the live broadcast of the event running on the L’Etape Czech Republic Facebook page and on the ROUVY YouTube Channel,” says Přemysl Novák, organizer of the organizing agency Petr Čech Sport. “All sports enthusiasts can register for the race free of charge in the ROUVY application from 17:30 and be able to race along with these professional cyclists,” adds Novák. “We are starting the 3rd season of races on ROUVY and interest from active participants as well as fans continues to grow. We believe the current combination of online races with the participation of TOP cyclists in a public setting will make the experience really exciting!”

Fans who arrive at the Harfa Shopping Gallery on Friday, January 14 will be able to receive autographs from their cycling heroes and can also look forward to an interesting sports challenge. “As part of the all-day ‘Beat the Best’ event, everyone can try virtual cycling. With a 900-meter sprint section, the three fastest can also look forward to great cycling prizes,”Novák says, adding that the trainers will be available to all interested parties from 10 am to 5 pm.

“It will be a big premiere for me personally,” said Ján Svorada before the start of the race. “Honestly, my condition at the moment is not up to scratch so I cannot afford to race near my best performance levels. That would most likely put me off riding for a few days. That’s why I’ll take part just for fun and as an enjoyable experience,” admits the winner of the three stages of the Tour de France, including the most famous win when he wore a victorious smile on his face in Paris under the Arc de Triomphe. He  mentions his memories of using the trainer: “In the past, during the winter, we of course had nothing at all like ROUVY with realistic simulations to train on. Back then we did not have the opportunity to, for example, pick a climb to do a recon ride or practice on it. It was then only possible to add resistance manually in order to simulate hills and so I mostly watched movies and followed the intervals on paper and with a stopwatch. Now, of course, it certainly is a more enjoyable and engaging activity.”

Registration for the second year of L’Etape Czech Republic by Tour de France was launched in September and there are currently over 1,500 applicants. “Huge interest shown so far is a confirmation of the great job we did at last year’s premiere. We have already increased the number of participants in the first year and the interest is growing. The second year will be an even bigger cycling festival and an enormous challenge for us and for all the participants. All the information that cyclists need can be found on the website www.letape.cz,” concludes Přemysl Novák.

Registration for the event is free of charge and open here.

L’Etape Czech Republic by Tour de France is an all-day cycling festival for the whole family. It is also an opportunity on June 11, 2022, to become a Sagan, Froome or a Contador for one day. It’s a race for the yellow jersey for 130 or 90 kilometers. There are climbing and sprint segments for the polka dot and the green jerseys. The start and finish is in Prague.  The routes lead along the closed roads of the Křivoklát region, the Beroun region and the Czech Karst. www.letapeczech.cz

ROUVY is a digital platform for athletes all over the world to compete, ride with friends for fun, do workouts and much more. ROUVY offers thousands of virtual locations and training options, including the chance to take part in races and cycle through an endless route catalogue. Thanks to a virtually simulated but realistic riding experience, ROUVY is undoubtedly the most suitable option for both beginners in the sport and ambitious athletes. www.rouvy.com.