19,297 Runners from Around the World Finished the 2022 NYCRUNS Brooklyn Marathon & Half Marathon Sunday, April 24, Setting a New Event Record 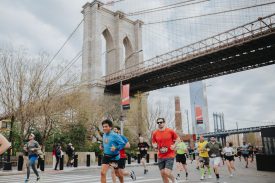 “Here on the iconic streets of Brooklyn, a new running tradition has begun in New York City,” said Steve Lastoe, Founder and CEO of NYCRUNS, the popular organizer of running events throughout New York City including the NYCRUNS Brooklyn Marathon & Half Marathon. “The Brooklyn running community has long dreamt of the day when the borough hosted a major marathon completely on their own streets. Today in Brooklyn, that dream became a reality.”

The historic new course started at McCarren Park in hip North Brooklyn, continued around the East River waterfront under the Williamsburg, Manhattan, and Brooklyn Bridges, headed up the grand concourses of Fulton Street and Flatbush Avenue before passing through Grand Army Plaza and historic brownstone Brooklyn into Prospect Park where the half marathoners finished their 13.1-mile journey. The marathoners continued through the park and then down and back along Ocean Parkway before returning to the park for the finish of their 26.2-mile run. View the marathon course here and the half marathon course here.

The day officially began at 6:55 a.m. with the Wheelchair and Handcycle participants leading the way. At 7:00 a.m. the elite field took off, followed by the rest of the field of 19,297 runners.

The 2022 NYCRUNS Brooklyn Marathon & Half Marathon featured $100,000 in prize money for qualified finishers, including a $5,000 first prize in the men’s, women’s, and non-binary fields in both the marathon and half marathon. Race winners who live within the five boroughs of New York City doubled their money with an additional $5,000 bonus.

Founded in 2011, the NYCRUNS Brooklyn Marathon began as a community race in Prospect Park with 262 finishers running multiple loops around the park. The half marathon distance was added to the event in 2018, and following a two-year pandemic hiatus in 2020 and 2021 the event returned for its tenth edition today with an epic new course through the streets and neighborhoods of Brooklyn, a first for the city.

In 2022, NYCRUNS will produce approximately two dozen running events for as many as 100,000 athletes. These events include our flagship Brooklyn Marathon & Half Marathon, the Newport-Liberty Half Marathon – one of the largest half marathons in New Jersey, and the storied Empire State Building Run-Up. NYCRUNS races are accurately measured, electronically timed, and produced by a highly trained team of event and medical professionals. NYCRUNS strives to be a relentlessly positive part of runners’ lives; a meaningful partner to local businesses, local causes, and local runners; and a great employer to our staff. NYCRUNS was built with these values in mind, and they guide us moving forward. For more information on NYCRUNS and the NYCRUNS Brooklyn Marathon and Half Marathon, visit www.nycruns.com and thebrooklynmarathon.com.

View all Releases by NYCRUNS