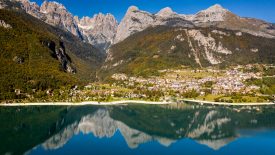 The event will be streamed live on Facebook starting with the pre-race show at 8:40am CEST (the elite race starts at 9am).

The event combines a 1.5-kilometer (1-mile) swim in Lake Molveno with a two-lap 32-kilometer (20-miles) mountain bike that climbs high into the Dolomites, followed by a 10-kilometer (6.2-miles) trail run.

“The course in Molveno is incredible,” said three-time XTERRA World Champion, Ruben Ruzafa. “Swimming with 3000m mountains all around you is a top experience. The bike is hard with two long and steep climbs and two long downhills on well prepared trails with a lot of flow. The run is beautiful as it goes along the lake and inside the forest, and the weather changes all the time, so it’s unpredictable.”

Nearly 100 elite athletes will race for a share of €100.000 in prize money, while 700+ age group competitors from 41 countries chase the sports’ ultimate, and most coveted title of XTERRA World Champion.

Then on Sunday, October 2, the sports biggest stars will have a chance to showcase their skills in the invite-only, made-for-TV, XTERRA Short Track Series Finale. The women’s race is up first at 14:00 CEST with the men following at 15:00.

Watch both races and find a wealth of pre-race coverage by following the appropriate links online at www.xterraplanet.com.