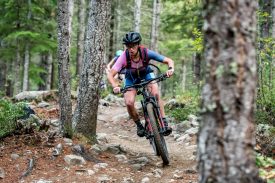 XTERRA returns to one of the most magical mountain towns in the world, Whistler, B.C., Canada, this June 11-12, with a weekend full of off-road triathlon, trail running, and swimming events for every age group and skill level.

/ENDURANCE SPORTSWIRE/ – XTERRA returns to one of the most magical mountain towns in the world, Whistler, B.C., Canada, this June 11-12, with a weekend full of off-road triathlon, trail running, and swimming events for every age group and skill level.

“We’re stoked to be joining the XTERRA Family,” said Kristian Manietta from Endurance Specific, a triathlete, coach, and event producer who co-created the Whistler X Off-Road Triathlon in 2019.

“I love the vibe surrounding XTERRA and off-road triathlon. It’s fun, it’s laid back (even when you want to be competitive), and it’s such a great experience. I’m looking forward to further bringing the stoke for the athletes that come and race here, the global epicentre for mountain biking and trail running.”

Manietta, an Australian who so fell in love with Whistler while on vacation he moved here, discovered the “stoke” of XTERRA for himself more than a decade ago.

“The seed for wanting to host XTERRA was actually planted in 2010 when I raced XTERRA Worlds,” he explained.  “That experience left a lasting memory, the Halloween after party was exceptional, and I had talks with Kahuna Dave about getting XTERRA back in Australia (because living in Canada wasn’t even on the radar then). Then on a whim in 2014, my wife and I went on a year adventure to Canada, and I raced XTERRA Victoria in 2015, which was awesome. From there, one thing led to another and a bunch of us in Whistler wanted to host an off-road tri because we shared XTERRA’s adventurous “Live More” spirit. It’s a spirit that not only unites our community here in Whistler, but that of endurance athletes worldwide. So, that’s what got us started with Whistler X, and now we’re proud to say it’s XTERRA Whistler!”

In addition to an epic course, ample lodging, great restaurants, and a wide variety of nature’s finest entertainment options, simply visiting Whistler in the summertime is reason enough to take a trip.

“Whistler is a world-class destination with things to do for the whole family,” said Karsten Madsen, an XTERRA certified coach who lives 10 minutes from the venue (and won this race last year).  “I enjoy taking my pup Lucas on the trails around Lost Lake where the swim is. It’s a stunning course, both visually and technically. It’s well built, world-class single track, and what makes it even better is that it can be ridden by athletes of many different abilities. The event is a total ace.”

“Whistler is an excellent destination, and the trails are amazing,” she said.  “And like Karsten noted, even though there are technical trails all around, where they produce the race is very manageable for most riding levels. I’d definitely recommended it for anyone who wants to challenge themselves and then enjoy the beauty of Whistler.”

For competitive amateur racers, it’s also a chance to win a BC Cross Triathlon Championship title, score a qualifying spot into the 2022 XTERRA World Championships in Trentino, Italy (October 1), and qualify for the 2023 World Cross Championships in Ibiza, Spain.

And it’s a great twofer with the classic XTERRA Victoria off-road triathlon one-month later on July 9-10.  Manietta and Rob Dibden, the XTERRA Victoria producer from Human Powered Racing, are even collaborating on a double award for athletes who do both.

“I’m really excited for the XTERRA family in the northwest and all over the world really, who now have TWO truly magnificent events to look forward to this summer in British Columbia,” said Emily McIlvaine, XTERRA’s Event Services Manager. “Canada is home to so many of our most enthusiastic competitors, and now with eight races from coast to coast, all at uniquely amazing destinations, there is a lot to look forward to this season.”

While there is no elite prize money this year for XTERRA Whistler, it’s in the works for 2023, while XTERRA Victoria is once again offering a $3,000USD pro purse this season.

Find the complete XTERRA Canada Series schedule with links to more information and registration at:

XTERRA is a global lifestyle brand that champions the outdoor endurance enthusiast in their pursuit of relentless adventure. With over 25 years of rich, off-road history,  XTERRA has cultivated a passionate community of like-minded individuals who strive to be the best version of themselves in all aspects of life. XTERRA offers partners a globally diverse community of loyal consumers who connect through sharing experiences, victories, struggles, personal stories, adventures, and much more.