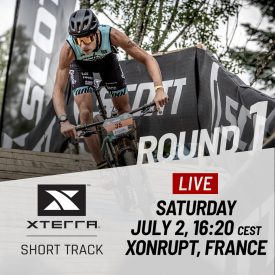 It’s an invite-only event exclusive to the top 25 eligible men and women, the majority of whom earned their spot via XTERRA World Rankings status (see start lists below).

More than 5,000 spectators will be on-site at one of XTERRA’s most iconic venues to create a roaring track-side atmosphere around the infamous bike park – an intricate series of wooden ramps and berms that up the action, speed, and adrenaline for athletes and fans.

The showcase race on Saturday is a prelude to the traditional full-distance XTERRA France off-road triathlon for amateurs and professionals on Sunday.. It’s the first of four Short Track/Full-Distance weekends that will award €200,000 to the world’s fastest XTERRA racers.

The event has attracted the world’s best off-road triathletes to France.

The women’s race is led by the 2021 World Cross Triathlon Champion, Loanne Duvoisin of Switzerland, who finished second to only Flora Duffy at the XTERRA World Championship last December.

Duvoisin won the first-ever XTERRA Short Trace race in 2019, and captured XTERRA Short Track Lake Garda last year. Marta Menditto from Italy, who just won the u23 World Cross Triathlon Championship title, is the only other woman in the field to have won two Short Track races before.

Samantha Kingsford from New Zealand, who swept all three majors in the U.S. last season, will be making her Short Track debut on Saturday.

“It’s a really different format than usual so I’ll be going into the unknown a bit,” she said. “It’ll be fast and furious for sure, and will make for really good watching. It’ll be cool to have the age groupers watch the race unfold too because they usually don’t get that opportunity.”

In the men’s race all eyes are on Arthur Serrieres from France, who has been dominant so far this year in winning the World Cross Triathlon Championship and all three XTERRA races he’s lined up at in Portugal, Italy, and Belgium.

Nobody, however, has won more Short Track crowns than Arthur Forissier from France, who has three to his credit. The only other man on the start list with a ST title is Ruben Ruzafa, the 3-time XTERRA World Champion from Spain, who won ST Italy in 2020.

Everything you need to know about Short Track

XTERRA is a global lifestyle brand that champions the outdoor endurance enthusiast in their pursuit of relentless adventure. With over 25 years of rich, off-road history, XTERRA has cultivated a passionate community of like-minded individuals who strive to be the best version of themselves in all aspects of life. XTERRA offers partners a globally diverse community of loyal consumers who connect through sharing experiences; victories, struggles, personal stories, adventures and much more.