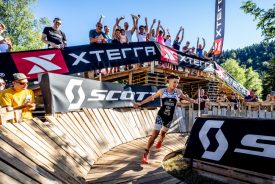 It’s the first Short Track win for Bitados and the third for Duvoisin.

An innovative new format was unveiled for the race that challenged competitors to a 200-meter swim, two-kilometer mountain bike, and one-kilometer trail run, three rounds through. The action was non-stop with dozens of lead changes and podium spots decided by seconds.

In the women’s elite race Amanda Felder (USA) led the field out of the water after the first of three swim segments with Samantha Kingsford (NZL) right on her heels and Jindriska Zemanova (CZE), Alizee Paties (FRA), and Duvoisin close behind.

Once on the bike Paties took over and held the lead until the last of three laps on the bike when Duvoisin surged to the front then blitzed the final 1K run in a day’s best time of 4:27 to take the tape with 15-seconds to spare.

“Even though it’s called short track, I still had to pace myself to make sure I could get across all three rounds,” said Duvoisin, who won the first-ever XTERRA Short Track event in 2019, and captured XTERRA Short Track Lake Garda last year.

“It was so fun to race so close together in this format, with so many changes in the lead. Normally in XTERRA, we race mostly alone, but here it was so good to be racing head to head throughout,” she added.

“I pushed hard on the front for the first two rounds, but I made a mistake in the final transition putting on my shoe and it cost me more than 10 seconds and as Loanne is very fast on the run it was always going to be difficult to stay ahead,” said Paties, who won the first XTERRA full distance race of the season in Greece. “In the end, I am happy with my shape, and I hope to show it when we go again tomorrow.”

Billouin, who won the XTERRA Portugal full distance race in May, said the hardest part of this new short track challenge was staying focused.

“I am really happy to finish on the podium and add another good result for this year,” said Billouin, who tomorrow will try to defend her XTERRA France full-distance title. “It was really fun but hard at the same time today, because you have to race fast but also concentrate through the many transitions and technical sections.”

Kingsford, Marta Menditto (ITA), and Zemanova finished 4-5-6 and were the only athletes outside the top three to avoid elimination. In the eliminator format, any athlete entering transition more than two-minutes behind the leader is pulled from competition. Those athletes are still awarded series points based on position when eliminated from the race, but do not continue to the finish line.

In looking at the unusual stat sheet – the culmination of three swim times, three bike times, three run times, and eight transitions – a few things stand-out. Most notably, everyone’s swim time was at least 15-seconds slower the second-time around. Kingsford had the fastest cumulative swim times (9:50) and transition times (1:48), Billouin had the best combined bike times (19:48), and Duvoisin had the quickest run splits (13:46).

In the men’s race there were dozens of lead changes and even with cameras covering nearly the entire course it was impossible to keep track of them all. The definitive move, however, belonged to the youngest man in the field, 18-year-old Panagiotis Bitados.

In the third and final swim leg, Bitados entered the water five seconds after race leader Arthur Serrieres (FRA), but exited with a five-second lead that ultimately held up to both the speed of Maxim Chane (FRA) on the bike and the the rush of Serrieres on the run.

“To win you needed speed and today I had it,” exclaimed Bitados, the young gun who won his second straight XTERRA Greece full distance race title earlier this year. “This short track format is so much fun, but even better when I win. The race was full on right from the swim all through the bike and run so I hope my legs will feel good tomorrow and I can go again!”

Serrieres passed Chane on the run to take second place, a rare miss for the 28-year-old from Montpellier, France, who won an unprecedented three majors in one week last month. He captured XTERRA Lake Garda victory in Italy on June 4, the World Cross Triathlon Championship for the second straight year on June 8, and XTERRA Belgium on June 11.

“I was telling everyone, and even myself, that I would hold back and try to save some energy for Sunday’s race but once you start the race you have no choice, the racing instinct takes over and you just push really hard the whole way,” exclaimed Serrieres, whose last ‘defeat’ was finishing runner-up to Olympic bronze medalist Hayden Wilde at the 2021 XTERRA World Championships in Maui.

“Everyone was pushing so hard on this amazing format so on the first lap I was at full gas and I was really struggling,” he added. “Fortunately, everyone slowed up and I could start to influence the race, at least until Bitados rode away from us! It was a really clever move by him to save energy and beat us all.”

“This format is amazing, especially here in France with the incredible ramps they build,” said Chane, who will try to defend his XTERRA France full-distance title tomorrow. “The race was so crazy fast. I tried to pace myself and race smart, but when the guys are so close together you have to follow the race, or you cannot fight for the podium. Can’t wait to go again tomorrow!”

The showcase XTERRA Short Track race was an invite-only event exclusive to the top 25 eligible men and women. Up next for all the athletes in today’s race is the XTERRA France full distance off-road triathlon tomorrow that combines a 1.5-kilometer swim with a grueling 40km mountain bike and 10km trail run.

There was a €5,000 euro purse awarded to the top five men and women in today’s race and €15,000 will be awarded tomorrow. It was the first of four Short Track/Full-Distance weekends that will award €200,000 to the world’s fastest XTERRA racers.

Félix Forissier from France and Marta Menditto of Italy captured the XTERRA France full-distance off-road triathlon elite titles in Xonrupt on Sunday, July 3, 2022 with winning times of 3:02:40 and 3:33:50, respectively.

The race combined a 1.5-kilometer swim with a grueling 40km mountain bike and 10km trail run.

XTERRA is a global lifestyle brand that champions the outdoor endurance enthusiast in their pursuit of relentless adventure. With over 25 years of rich, off-road history, XTERRA has cultivated a passionate community of like-minded individuals who strive to be the best version of themselves in all aspects of life. XTERRA offers partners a globally diverse community of loyal consumers who connect through sharing experiences; victories, struggles, personal stories, adventures and much more.