World Champion Remco Evenepoel to train with fans on BKOOL 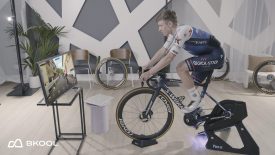 On Monday you have a date with the World Champion in BKOOL from 18:00h.

/ENDURANCE SPORTSWIRE/ – Virtual Cycling is back to show us how new technologies can bring professional cyclists and their fans together.

On Monday 5th December, the virtual cycling platform BKOOL will allow hundreds of amateur cyclists to train with Remco Evenepoel, just a couple of months after he lifted the Men’s World Road Race Champion, in Australia.

The Belgian cyclist will interact with fines during the event via his Instagram profile, where he will be answering their questions and showing them the details from the route. The aim is to create a total connection between the World Champion and his fans who, as well as being able to cycle alongside him, will enjoy the chance to speak with him live.

All the details have been taken care of for this experience, so that it can be as realistic as possible for all those lovers of cycling. So much so, that this very week, the virtual cycling platform has launched a new virtual store to be able to kit themselves out with models of real, digitised bikes, for training sessions and virtual Group Rides. Amongst the models available in the store include the official bike for the Quick-Step Alpha Vinyl team, the Specialized Tarmac SL7, which will be used by Evenepoel.

Both Remco as well as the rest of the fans who will join the Group Ride will be able to ride on their equipped virtual model bikes, including Roval wheels, and they will also be able to use the official Quick-Step Alpha Vinyl team kit with their virtual avatars in BKOOL.

In addition, in order to complete the experience, during the warm-up the participants will be able to watch an exclusive interview where Evenepoel reveals some secrets about his career as a cyclist.

In the words of Ángel Luis Fernández, BKOOL Marketing Director:

‘Having the best cyclist in the world riding in BKOOL is not only an honour, but also a tremendous responsibility and we have taken great care with the details so that the experience for Remco and our users is the best one possible.

At BKOOL we have the best routes, the best virtual cycling systems and now, real bikes so that the experience is complete. We are putting all of this at the disposition of professional cyclists and amateurs, and we are delighted that BKOOL is the platform to bring them together.’

This was added to by Evenepoel who said ‘I am really looking forward to joining my fans on the virtual road on Monday. I train a lot of my rollers, and to be able to ride with my fans, who have shown me so much love and support, will be a lot of fun. BKOOL have really taken care of the details, by making my virtual kit and bike available, and I hope everybody is looking forward to riding as much as I am.’

On Monday you have a date with the World Champion in BKOOL from 18:00h.

The date will take place on Monday 5th December at 18:00 (CET) and taking part is completely free thanks to the 30-day free trial available at www.bkool.com . All you need to take part is a Smart Trainer or Smart Bike and a BKOOL user account.

BKOOL is a technology company creating interactive and innovative solutions for sport and video-gaming. In the cycling sector, BKOOL has developed the most advanced and realistic simulator on the market. Furthermore, with BKOOL Fitness, the company has entered into the world of home fitness with an app for smartphones to be able to do classes with fitness instructors from home. Their virtual products are currently commercialized in over 50 countries.